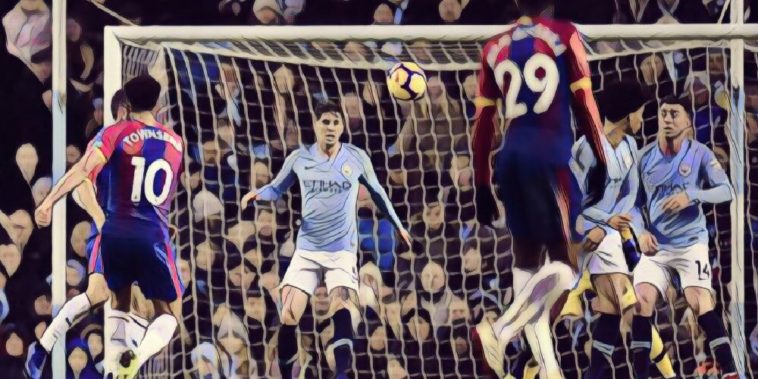 It’s probably only fair to shut down the goal of the season contest right here and right now.  We surely have a winner in Andros Townsend’s staggering volley against Manchester City. Everything about his technique was sublime as he set himself beautifully to smash home a volley from thirty yards out.  No keeper in the world is getting anywhere near that.

Ian Wright called it the perfect volley, he’s not wrong, and it was Townsend’s absolute screamer which set Palace up perfect for their first league win in Manchester for nearly three decades.

German defenders aren’t supposed to make the kind of cock up that we saw at the John Smith’s stadium.  Christopher Schindler’s Huddersfield side had just got themselves back in the game and were turning the screw against Southampton; that was before Schindler turned straight into Nathan Redmond on the edge of his own box.

The German defender should have smashed it out for a throw, a corner, or gone for a forty yard hoof up the pitch, whatever; anything was better than his weird River Dance attempt at ball control.  The defender allowed Redmond in to steal the ball and tee up Obafemi for a tap in, which killed the game, leaving The Terriers starring down the barrel.

Virgil Van Dijk is about as far as you can get from poor Christopher Schindler. The rock at the back of Liverpool’s reborn defensive solidity has been monumental since his £75 million arrival in January. He was head shoulders, almost literally, above anyone for Liverpool at Wolves on Friday evening.

The Dutchman won every dual, tussle and tackle that came his way, including one fascinating race with Adama Traore in the second half that left the speedy winger bemused and dispossessed by Van Dijk after a flat out sprint. To top it all off, the towering centre-back got on the end of Salah’s cross, to double Liverpool’s advantage.

It was an afternoon to forget for Manchester City at the Etihad on Saturday. Not only did they find themselves on the end of a shock defeat, but their previously solid defence has now started to look a tad shaky. Kyle Walker endured a particularly torrid time, gifting Palace a lot of freedom in the first half down his flank, before diving in like a young Glen Johnson, to gift the visitors a Penalty early in the second. “He will learn” said City manager and ominous Bond villain Pep Guardiola when asked about Walker’s brain farts. Scary.

The South Korean is a dynamo for Spurs, giving them so much attacking flair and style. He was at his brilliant best for his team, as they thrashed Everton at Goodison Park on Sunday. Albeit, a gifted chance, his opening goal was not an easy one, with the angle always against the forward as he raced on to the loose ball. Son was unfazed and duly fired home to equalise.

From there on in, he was a menace to Everton, running at their deteriorating back line and creating chaos. He grabbed another goal and assist for his troubles and on this form, could be a galvanising force for Spurs in their title push.

Poor Jordan Pickford has endured a horrible month. He has seemed rash and hesitant following his blunder at Anfield in the Merseyside Derby and he was at fault for both of Spurs opening goals. At 1-0 up, Everton needed their players to remain calm and try to contain Spur’s aggressive, pressing counter attack.

They didn’t need Pickford and Zouma having a complete breakdown in communication, with the England ‘keeper rushing out and hammering the ball against his onrushing defender to gift Son his first goal. He should also have stopped Alli’s strike for 1-2, allowing it to go through him. They were two massive moments that flipped the momentum of the game and caused more grief for the former Sunderland goalie.