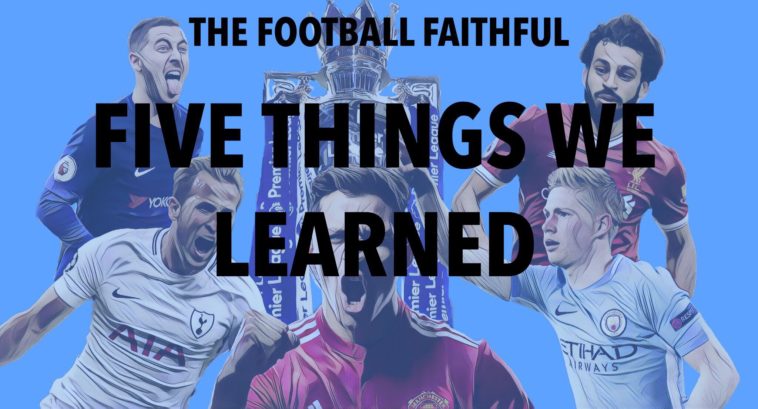 After yet another international break, the Premier League roared back into life this weekend. There was plenty of drama throughout the table as teams really start to jockey for position. Here’s a look at five things we learned from this week’s action.

In one of London’s most bitter rivalries, Tottenham turned on the lights, with an outstanding display to inflict Chelsea’s first league defeat of the season. This was by far and away Spur’s best performance of the season and all credit must go to them for stepping up.

However, Chelsea’s defence was left brutally exposed throughout and for the first time this season, they really missed the presence of N’Golo Kante to shield their back line. Perhaps this lack of cover also explains the hideous defending on display by Chelsea, as only Spur’s indecisive finishing kept the score line respectable. It will interesting to see if other top six rivals take note of this going forward. Jorginho was left gasping for most of the game as Spurs ran rings around Chelsea’s lackluster midfield.

The Tinkerman shows his magic once again

Across the Capital, in West London, Fulham were welcoming their new gaffer, who has inherited a side with undoubted talent, but the most brittle defence in the league. Saturday afternoon’s display against Southampton though, should do much to lift the spirits at Craven Cottage. Although their opponents were in the game for most of the contest, Fulham showed real quality at key moments to get ahead and claim all three points.

The likes of Mitrovic, Sessegnon and Schurrle all excelled and with the new manager in place, they offer hope of rescue after a dismal start. Ranieri will have to sort that defense though, if they are to really turn things around, however the charismatic and likeable Italian will bring a fresh injection of optimism to everyone at Fulham.

Relegation dogfight could go right down to wire

Huddersfield’s victory away at Wolverhampton has really shaken things up at the bottom of the Premier League. Now, only two points separate six teams, with West Ham looking over their shoulders in thirteenth place, and just four points clear of the bottom. With no room to breathe and plenty of sides capable of causing an upset, this really could be one of the most intriguing relegation fights in Premier League history.

Had they faced a more confident opponent on Saturday afternoon, Manchester United may have been well beaten in their own backyard. Crystal Palace really went for them and should have scored at least two on the day. As it was, they settled for a point, which few would have expected them to achieve.

After the match, Mourinho said his side lacked heart, which is pretty damning for the fans to hear from their manager. They have more than enough quality to put teams like Palace to bed and really need to start seeing more from their talented squad. The manager desperately needs some of the more creative players to step up and take ownership or they risk being locked out of top four contention altogether.

Not many will have underlined Liverpool’s fixture away at Watford with any real significance. However, a lot of Liverpool supporters will remember their roller coaster antics at Vicarage last season, which saw them arrive at a chaotic 3-3 draw on the opening day of the 17/18 campaign.

In isolation, that result was not a catastrophe, but it highlighted everything still wrong with the club, even after one and a half seasons with Klopp. Set piece nerves, a useless keeper and a porous defence were all issues yet to be addressed by The German.

Just over a year on, and Liverpool’s 3-0 win in the same fixture, is a sign that Klopp has taken his team in the right direction. Despite a few hairy moments, Liverpool looked a lot more in control and measured in their approach, in a game where they had to show real patience. Watford are a good side these days and really made Klopp’s men work for their three points, but it’s a victory which shows how far Liverpool have come since that crazy match back in August 2017.