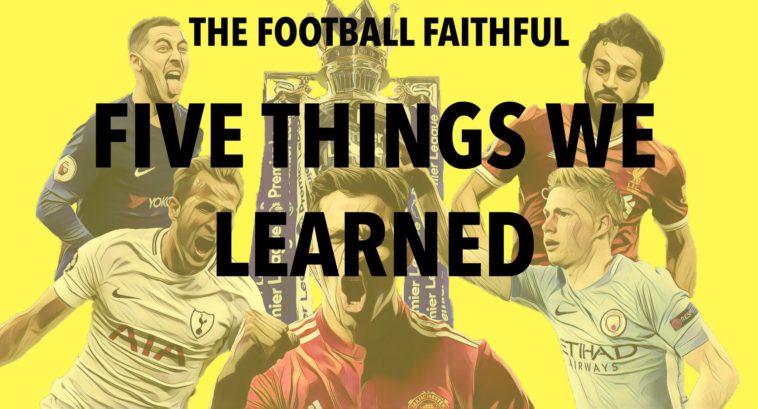 It only feels as though it’s been back two minutes, but already our beloved Premier League is about to be snatched away from us again; and for nothing better than another international break. Sigh.

As we disembark the top flight ship for a prolonged week, here’s a look at the five things we learned from this weekend’s Premier League action.

Of all the teams in the Premier League right now, none will want this current cessation of hostilities less than Arsenal. The Gunners are currently in red hot form and look to have the bit back between the teeth.

Their attacking prowess was never in any doubt, and it now appears that Emery has got their engine purring once again. They are now in a nine game winning streak which is hard to poke holes in. All they can do is win these games and keep the pressure on those around them which they have done, to their credit. However they will face sterner tests after the international snooze fest, when we will likely get the measure of just how far they have come with their new manager.

There was only ever one story that mattered this weekend wasn’t there? Rumours went into overdrive on Friday evening after it was announced that Manchester United’s besieged manager Jose Mourinho was due to be sacked on Saturday evening, regardless of the result.

As Saturday approached there were also plenty of reputable sources to come out and say these rumours were nonsense. However, at half-time on Saturday evening the Old Trafford faithful stood in collective shock as lowly Newcastle were deservedly 2-0 up and looking likely to come away with all three points. The proverbial writing looked to be on the wall for Jose.

However, the Portuguese once again showed just how dangerous he can be when backed in to a corner. The second-half display from his side was much more fitting for a side with such lofty ambitions. Fighting back with spirit and quality, they pounded Newcastle’s deep lines and eventually forced a comeback to snatch all three points. It’s a win that papers over some big cracks, but at least it showed some signs of life from the United manager.

Eddie Howe’s men have largely gone about their business as they always do this season. However, the big difference this term looks to be their improved finesse and composure in front of goal. Their 4-0 drubbing of Watford was yet another feather in the cap for one of the most likeable sides in the top flight. King, Wilson, Fraser and Brooks are all in excellent form and scoring at will, but huge credit must go to their manager.

Howe has got The Cherries playing some truly wonderful football and punching massively above their weight. They have so far scored more than Manchester United, Liverpool and Spurs this season and play with real creative freedom. If they are to surprise us all and push for Europe, they will do it with some style and eye catching displays.  There may be plenty of scouts ready to raid The Vitality over the next couple of windows if they continue to impress.

Two of the most inconsistent sides in the Premier League met at The King Power Stadium on Saturday as Leicester hosted Everton. They are two teams who have most of us scratching our heads on a weekly basis. One week they can look the business, only to slip the next and offer more problems than positives.

This was a good weekend for Everton though. Their Icelandic talisman Gylfi Sigurdsson will likely take the plaudits for the win, however, their Brazilian duo of Bernard and Richarlison really shone in the East Midlands. Richarlison’s movement was too quick and clever for a labouring Wes Morgan, while Bernard showed some exquisite touches and confidence. If Silva is to have more good days than bad this season, he will need his boys from Brazil to be in this kind of menacing and deadly form as the campaign progresses.

Liverpool and City – a let down

It was supposed to be the blockbuster of the weekend. Two of the three unbeaten sides met at Anfield for a showdown which would have seen either side pull away at the top with a win. It’s a fixture which has had the purists salivating over the past few years. This time round though, if we are being brutally honest, it was a dour ninety minutes which will have left both sets of supporters feeling a bit deflated.

Both sides struggled with their final ball and looked short of their best form on a chilly Sunday afternoon in Merseyside. For 85 minutes of the 0-0 draw, there was little to even talk about, as neither side looked capable of stringing together enough quality to unlock two excellent defences.

However, a rare piece of rash defending from Virgil Van Dijk saw a penalty rightfully given with less than five minutes to play.  Mahrez duly stepped up and blazed over the bar in an act symbolic of the lack of quality on display between both sides.

Liverpool look really short at the moment and have been leggy for most of the season. Their defence though looks excellent and they will look to regroup after a particularly gruelling run of games. Neither side showed much in terms of putting down a marker and Chelsea fans will be left feeling quietly confident at this stage of hostilities.