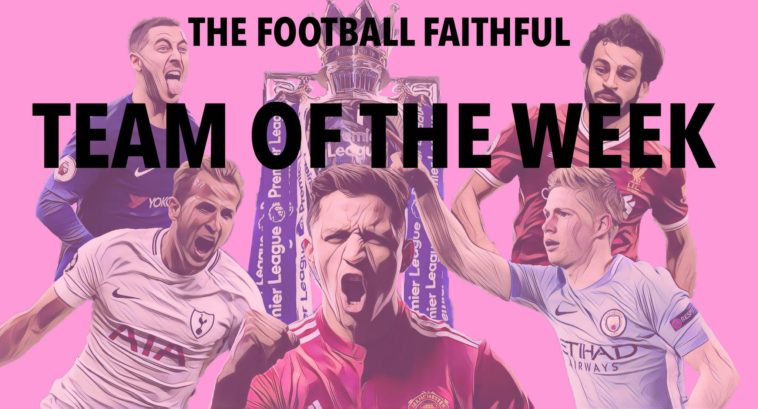 Neither goalkeeper was particularly busy at Old Trafford on Sunday, but Brazilian number one Alisson’s superb reaction, diving at the feet of Manchester United attacker Jesse Lingard was crucial for his side, and may become even more important at the end of the season when the final points totals are tallied up.

It was a solid defensive display from the entire Manchester United back four in fairness, who restricted Liverpool to very few chances in this huge game between these two most bitter of rivals at Old Trafford.

Converted winger Young made a number of crucial interceptions, kept Sadio Mane under wraps and got forward at any opportunity.

Excellent at the back from the Dutchman, who made a number of clearances, and showed a maturity beyond his years as the Cherries were held to a 1-1 draw against Wolves.

Looks to be benefitting from using his own brain rather than Jose Mourinho’s with the England left-back shackling the Premier League’s joint top scorer Mohamed Salah for 79 minutes of Sunday’s game, before the Egyptian was withdrawn without getting a single shot on target.

As Manchester United sat back and hoped to hit on the counter, Fabinho was able to pull the strings in the middle of the park for Liverpool, bringing the ball out of defence.

He also helped to close United’s midfield down as they tried to break out of their defensive shape.

After an injury-hit season, the former Manchester United flop bagged himself a goal and an assist against struggling Southampton, to help move Arsenal move above his former side into fourth place.

Actually did very little against Leicester…oh, apart from the small matter of ruthlessly scoring two goals, including the strike to put them 2-1 in front after Jonny Evans had equalised for the hosts.

Three goals and an assist…is there anything else to say about this perfect performance? Showed his electric pace and some fine composure, although was massively helped by some diabolical Cardiff City defending.

Alongside the Spaniard Deulofeu, the burly striker bagged a brace in the good old fashioned ‘big man-little man’ combo.

A goal and an assist for the Venezuelan forward – and it could have been so much more – as Rondon helped Newcastle to a 2-0 win over bottom side Huddersfield Town to take his tally to seven goals for the season, and more crucially, helped the Magpies up to 15th in the table in their bid to beat the drop.