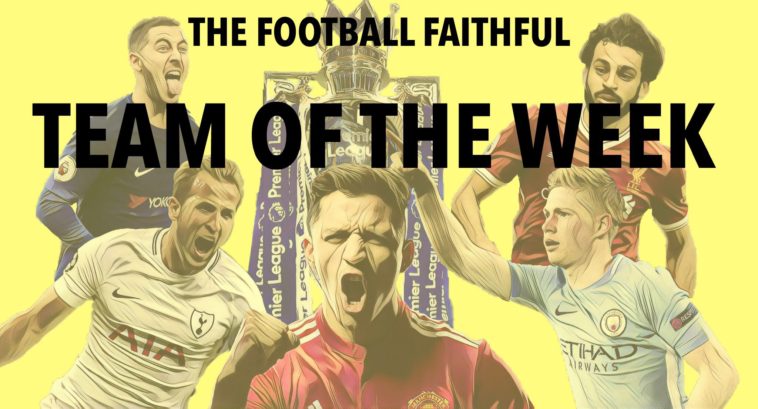 It’s time to find out which players achieved the honour of gaining a place in The Football Faithful’s Premier League Team of the Week.

The England international has come under much criticism this season, after a series of below-par performances. The 25-year-old was back to his best in Everton’s 2-0 win over Chelsea on Sunday though, making several saves in an impressive win for Marco Silva’s side.

After his centre-back partner was dismissed after just four minutes, the Leicester defender shone as Brendan Rodger’s side earned a hard-fought win at Burnley.

Playing for over 85 minutes with 10-men, the Northern Irishman defended superbly to keep the disadvantaged Foxes in the game before Wes Morgan snatched a late winner.

‘Captain Morgan’ was thrust into action as an early substitute following Harry Maguire’s fourth-minute red card, and the veteran defender used all his experience in a solid defensive display. The 35-year-old then powered home a 90th-minute header to seal an unlikely win for Leicester.

But for their stand-in captain, Newcastle would have probably returned home from Bournemouth without a point. The Welsh international defended well, with his acrobatic goal-line clearance preventing what would have been a certain goal from Callum Wilson.

The Scotsman is arguably playing the best football of his career following a switch to an unfamiliar left wing-back role. Ritchie capped another industrious display with a stunning late volley to earn Newcastle a point at Bournemouth, the 29-year-old not holding back his celebrations against his former club.

A fundamental part of the Everton midfield, the Senegalese was immense in Marco Silva’s side’s 2-0 win over Chelsea, making five interceptions and recovering the ball six times. Everton fans must be delighted they managed to keep the 29-year-old midfielder from joining PSG in January.

A stunning free-kick from the 22-year-old gave 10-man Leicester the platform to earn a hard-fought win at Burnley. The attacking midfielder found space all afternoon, with a fine display dampened only by a booking for revealing a t-shirt message dedicating his goal to a late, young fan. Maddison defended Michael Oliver’s decision to book him, though perhaps compassion and common sense could be used more often by Premier League referees.

Is there a more in-form player anywhere in the country right now? Liverpool’s Sadio Mane scored once again in their 2-1 win at Fulham, taking his tally to 17 Premier League goals for the season and looks a surprise chance for the Golden Boot. Mane now has 11 goals in his past 11 appearances and has stepped up for Jurgen Klopp’s side in the title run-in so far.

Huddersfield are headed for the Championship, their 4-3 defeat at West Ham, having led 3-1, leaving them a huge 16 points from safety.

A bright spark in the defeat at West Ham was 21-year-old Karlan Grant, signed from Charlton in January, the forward could make a big impact in the second tier next season. He scored a brace at The London Stadium to take his tally to three in six for the club, with his second a brilliant finish from 25 yards.

Six goals in his past nine appearances for the Norwegian, who’s double against Newcastle took his league tally for the season to 11. Labelled as the ‘complete package’ by manager Eddie Howe, the 27-year-old’s blend of pace and power continues to prove a problem for Premier League defences.

West Ham’s ‘super sub’ did it once more at The London Stadium. The Mexican coming off the bench to score a late double and rescue Manuel Pellegrini’s side.

The Hammers had trailed 3-1 to Huddersfield before Angelo Ogbonna’s header and Hernandez’s intervention sealed an unlikely win. Only Jermain Defoe and Olivier Giroud now have more Premier League goals off the bench than Hernandez.