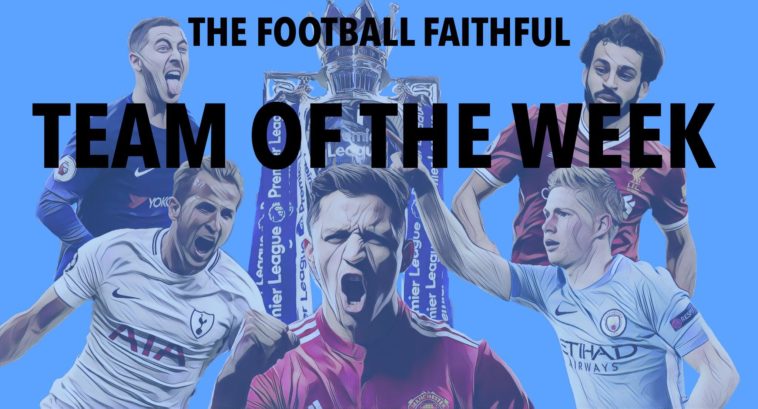 The first Filipino to play in the Premier League, Cardiff’s Neil Etheridge made several smart saves as Cardiff surprisingly won at Leicester. His save from James Maddison’s penalty, his third spot-kick save of the season, ensured a clean sheet and a vital 1-0 win for Neil Warnock’s side.

A superb performance from the big Frenchman as Wolves shocked Spurs at Wembley. A towering presence at the back, the defender also got himself on the scoresheet with a powerful headed goal for Wolves’ equaliser.

Composed as ever as Chelsea earned a narrow 1-0 win at Crystal Palace on Sunday. The Brazilian also provided the assist for N’Golo Kante to score the game’s only goal as Chelsea tightened their grip on fourth place.

An important presence in the Cardiff backline as they secured three vital points at Leicester. The big defender contributed to their clean sheet to ensure an important result as both Fulham and Burnley won below them.

Has quietly established himself as a fundamental part of the Liverpool midfield, the Dutchman excelled against Arsenal.

The 28-year old produced a tireless display, setting the tone as the league leaders secured an emphatic win.

Two goals and an assist in United’s 3-1 win over Bournemouth, the Frenchman looks like a player reborn under new management. Frozen out by Jose Mourinho, Pogba is starting to show why United shelled out a record fee for his services and is flourishing under caretaker boss Ole Gunnar Solskjaer. He now has four goals and three assists in three games under the Norwegian.

A match winning display from Cardiff’s Spanish midfielder. The 24-year old, on loan from Real Betis, secured his side’s win at Leicester with a fine goal in stoppage time. Cardiff are now in 16th, three points clear of the relegation places.

Had the beating of Stephan Lichtsteiner, and didn’t he know it. A constant attacking threat as Liverpool dismantled Arsenal at Anfield. The Senegal international deservedly got himself on the score sheet after a typical display of pace and trickery.

Another player who is flourishing under United’s new manager, the England forward provided a goal and an assist in their 4-1 win over Bournemouth.

His assist for Pogba’s opener, beating two players with skill before crossing, was a brilliant reminder of Rashford’s talent.

An irreplaceable part of Liverpool’s attacking play, the Brazilian scored his first career hat-trick as Liverpool thrashed Arsenal at Anfield. His trio of goals were, surprisingly, his first at home this season for the league leaders and he will need to continue firing if Liverpool are to end their 29 year wait for a league title.

After a brilliant display was capped by frustration in front of goal against Wolves on Boxing Day, the Serbian got a deserved goal as Fulham beat Huddersfield at Craven Cottage. His late winner saved the blushes of team mate Aboubakar Kamara who snatched a penalty from Mitrovic only to see his spot-kick saved.