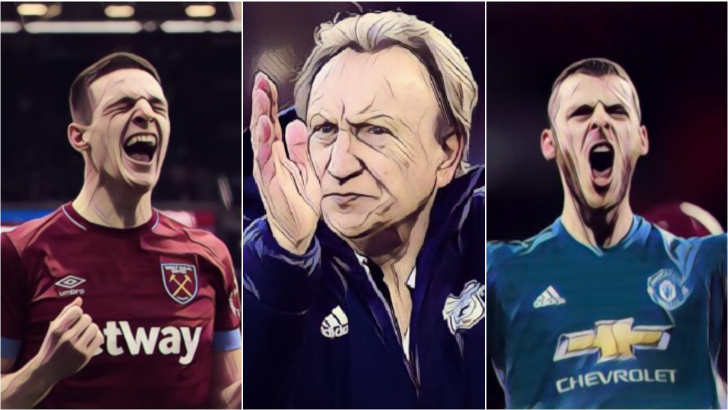 This week we bestow honours for a Goal of the Season contender, a sensational assist, a goalkeeping masterclass, as well as a misguided defence of one of the league’s worst owners and a pro-Brexit rant.

It was an incredible strike that secured a huge win over their London rivals, but it was more meaningful than that. On a personal level for Rice it cements his status as a bona fide Premier League player with a high ceiling for success in his career. He’s only 19, remember!

On a club level it was a huge statement by West Ham, a team full of talented players winning off the back of their young homegrown future captain. Without wanting to fall into the trap of overestimating a team after one performance, the future is looking a hell of a lot brighter for the Hammers after the disaster that was last season.

Declan Rice was certainly in contention for this award as well, but there was hardly a sweeter strike all weekend than Andre Schurrle’s goal against Burnley in the second minute of play. A lovely pass from Denis Odoi was controlled wonderfully by the German to set himself up for one of the best goals we’ll see this season.

Schurrle what a goal👏🏽👏🏽. The ball control be something something 👐🏻 pic.twitter.com/9Th8nXXWfJ

That was as good as it got for Fulham, who lost 2-1 to Burnley despite the Clarets not having any shots on target, thanks to two own goals in the space of three minutes. D’oh!

Paul Pogba put in another terrific performance, but without David De Gea it’s hard to see Manchester United holding on to that 1-0 win over Spurs. The Spaniard made 11 saves on Sunday night, two more than any other goalkeeper has had to make in a single game in the Premier League this season.

Can understand people saying that De Gea wasn’t overly extended by the majority of his saves but being as busy as that, you feel you’ve played a huge part in the win. A save is a save. His positioning and decision making was faultless and his use of his feet was exceptional.

Provided Spurs finishing left a lot to be desired at times, but De Gea’s positioning was perfect. He never had to scramble to make a save and looked comfortable all evening. When a keeper is in the right position every time, every save looks easy.

Man United weren’t perfect on Sunday, but they tormented Spurs on the counter, especially in the first half. Paul Pogba expertly exploited the space in behind with an outrageous pass to lay it on for Marcus Rashford to score the game’s only goal.

The inch perfect pass from Pogba, the well taken finish from Rashford. What a goal! https://t.co/L3QYUOhRGI

Honourable mentions go to David Luiz for his assist against Newcastle United and Arsenal’s Katie McCabe for this sumptuous pass in the Women’s Super League.

This was a tough one, as I didn’t think any team was particularly impressive. There were a lot of close games that could have gone either way with some fairly uninspiring football on show. But if we’re going to give it to anyone, it might as well be West Ham United.

The Hammers have been ticking along really nicely after a tough start to the season, reinforcing their good form with a great win over Arsenal on Saturday. Not only that, but it was well deserved too. It will be interesting to see how this team evolves over the next year or two and whether Manuel Pellegrini can achieve tangible success with them.

Ole Gunnar Solskjaer is undoubtedly reading this right now, miffed by his omission for this award, but as good as United’s win over Spurs was, they still leant on their goalkeeper very heavily for the win. That’s why Ralph Hasenhuttl deserves to be crowned Manager of the Week.

Before the Austrian’s arrival on the south coast, Southampton were looking odds-on for the drop. Since then they have gained 10 points from 7 games, a better run of form than all of their relegation rivals with the exception of Burnley. The away win over Leicester City this past weekend showed how much he has improved this squad in such a short time.

Looking forward to Shane Long‘s next goal in 2020.

Rant of the Week

Least surprising revelation of the week? Neil Warnock is pro-Brexit. He really went off on one in his post-match press conference about it too.

"I think we'll be far better out of the bloody thing. In every aspect. To hell with the rest of the world."👀

Moanbag of the week goes to Jurgen Klopp, who had the temerity to complain about squad depth while referencing Spurs of all teams, who have just sold Moussa Dembele, will be without Heung-Min Son for the duration of the Asian Cup, and could be missing Harry Kane through injury for several weeks.

This is Jurgen Klopp who has spent about £250m in the last year, playing the poor mouth and citing Spurs, who signed no one during the summer. https://t.co/ICMaD1KC8F

Please get out your tiniest violin for the Reds manager.

Otherwise known as the “Oh, mate” award, this honour goes to Rio Ferdinand for his staunch defence of Newcastle United owner Mike Ashley on BT Sport at the weekend.

Ferdinand, who sells his own range of clothing in stores owned by Ashley, then doubled down on his already idiotic argument with even more idiocy.

There's nothing wrong with being wrong.

There is something wrong with being wilfully blind to the truth. pic.twitter.com/tXa5Igwc5q

Surely no one could top that for sheer stupidity? Richard Keys: “hold my beer.”

Well said @rioferdy5 👏👏. If Rafa loves Newcastle as he says – spend some of his own money. He’s got enough. Management is about teamwork – why should it always be Ashley? Buy it. It’s still for sale. They’re in the bottom 3 & Rafa is responsible. He picks the team.

No award here, just a big fan of this: