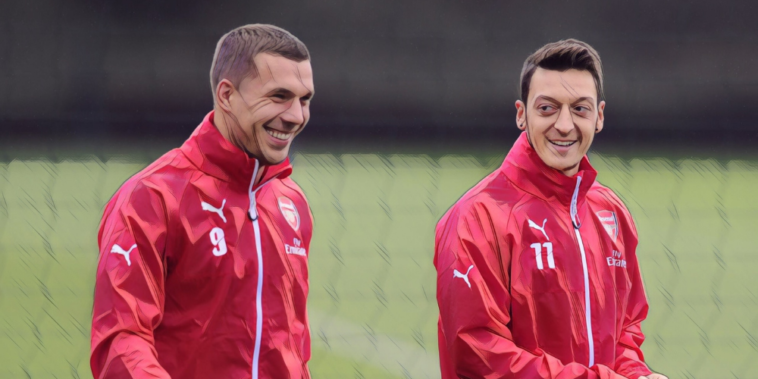 Lukas Podolski says he is happy to see Mesut Ozil move to the ‘chaotic’ Turkish Super Lig, but accepts the midfielder’s move to Fenerbahce is a ‘step backwards’ for his former Arsenal teammate.

Ozil is expected to complete a move to Fenerbahce in the coming days after reaching an agreement to terminate the remainder of his Arsenal contract this month, the German having been ostracised this season and left out of the Gunners’ squads for their Premier League and Europa League campaigns.

Podolski – who currently plays for Antalyaspor – previously shared a dressing room with Ozil for both club and country and says he is delighted to see his former teammate also make the switch to Turkish football.

“I’m happy that Mesut will play for us in Turkey in the future,” Podolski told SportBild.

“In the Süper Lig it happens time and again that big player names are presented by the club bosses to satisfy the fans. Something didn’t always come around, often it was more of a PR stunt. Mesut, on the other hand, will promote Fenerbahçe in terms of sporting quality and image.”

Podolski has offered Ozil an insight into what he can expect from Turkey’s top flight, warning the 32-year-old that there is ‘little flow’ to the games with ‘heated’ fixtures often getting ‘a bit chaotic’.

“Mesut will quickly notice that the games can get a bit chaotic here. Emotions rule on the pitch, which is why it often gets heated. There are many fouls and discussions that follow. The referees often interrupt the game, which is why there is little flow of the game.

“Of the 90 minutes, less than 60 minutes are felt to be real playing time. The league is not tougher than in England, Mesut is used to taking a lot.”

The 35-year-old, who was part of the Germany side that won the 2014 World Cup alongside Ozil, admits, however, that the midfielder switch from Arsenal to Fenerbahce is a ‘step backwards’ and says the Turkish league has lost its ‘connection’ to continental competition in recent years.

“We don’t have to fool ourselves [though]. Of course, it is a step backwards when you move from a top club like Arsenal London to Fenerbahçe in Turkey,” he said.

“Unfortunately, the Turkish league has lost a bit of connection internationally in recent years. Last season, Turkey scored fewer points in the UEFA competition than it has done in ten years. Countries like Austria and the Ukraine have overtaken us.”

Friday Quiz – Have you been paying attention to the week’s biggest football stories?