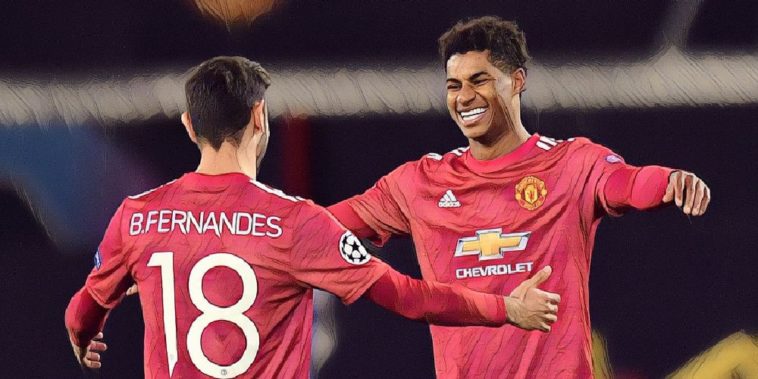 Marcus Rashford enjoyed an evening to remember after coming off the substitutes’ bench to score his first ever Manchester United hat-trick in midweek, netting three times during the club’s 5-0 Champions League thrashing of RB Leipzig.

We’ve decided to look at each of the players to achieve the feat, here are the five players to have scored a Champions League hat-trick after coming off the bench:

The late nineties saw Kaiserslautern upset the status quo in German football in fine fashion, winning a shock Bundesliga title just a year after earning promotion to the top flight.

Otto Rehhagel’s side then entered the 1998/99 Champions League and finished top of their group to advance to the knockout stages, winning each of their three home games including a 5-2 win against HJK Helsinki.

Key to that success was a hat-trick from substitute Uwe Rosler, the summer signing making his mark with three headed efforts following a free transfer arrival from Manchester City.

It was the highlight of a single season stay at Kaiserslautern for Rosler, who helped the side reach the quarter-finals where they were eliminated in comprehensive fashion, losing 6-0 on aggregate to compatriots Bayern Munich.

Deportivo La Coruna were once regulars at Champions League level and enjoyed some memorable results in the competition, including this 4-3 victory over Paris Saint-German in a tournament classic.

The two sides met in the now defunct second group stage during the 2000/01 season, with a PSG side steeped in Premier League nostalgia – featuring the likes of Nicolas Anelka, Jay-Jay Okocha and Mikel Arteta – racing into a three-goal lead before the hour in Spain.

Deportivo, however, were made of stern stuff and it was a half-time substitute who inspired their comeback.

Walter Pandiani capitalised on PSG’s vulnerability in the air by heading home a first from close range, before Diego Tristan and a second Pandiani goal improbably drew the scores level.

The Uruguayan then capped the comeback by heading home his hat-trick to spark wild celebrations, Deportivo topping the group and reaching the last eight before being eliminated by David O’Leary’s youthful Leeds.

The third player to achieve the feat, Joseba Llorente was sent on at half-time with Villarreal in danger of succumbing to a shock result against Aalborg in 2008.

The Spanish side had made a slow start and were fortune to head into the interval level at 2-2, the Danish minnows attacking play springing a surprise.

Villarreal manager Manuel Pellegrini turned to forward Llorente at the break and it was a substitution that proved the catalyst for a much improved display.

Llorente helped himself to a hat-trick as Villarreal ran out convincing 6-3 winners at El Madrigal, netting twice from close range before volleying home a Joan Capdevila cross, putting the gloss on an entertaining scoreline to claim the match ball and write his name into the history books.

Kylian Mbappe was deemed only fit enough for the bench during Paris Saint-Germain’s victory over Club Brugge last season, though it’s fair to suggest the Belgian side were pleased the forward was restricted to just a cameo appearance.

Mbappe was introduced for Eric Maxim Choupo-Moting early in the second half with the Parisians leading by a narrow 1-0 scoreline, taking just nine minutes to double their advantage.

The French forward then assisted Mauro Icardi to make it three, before helping himself to a hat-trick with two late goals to seal an emphatic victory.

It was an electric display from one of the world’s finest young footballers as he destroyed the hosts with his pace and ruthless finishing ability, netting a perfect treble in just 38 minutes on the pitch.

Rashford wrote his name into the record books on Wednesday night and did it in unprecedented fashion, introduced with just 27 minutes remaining before putting RB Leipzig to the sword.

The England international raced clear for his first of the evening, firing home emphatically to double the advantage for Ole Gunnar Solskjaer’s side after Mason Greenwood had opened the scoring.

Rashford made it two on the night with another fine finish just four minutes later, before sealing his hat-trick in stoppage-time after earlier stepping aside to allow Anthony Martial to score from the penalty spot.

It was a first Manchester United hat-trick for the 22-year-old and just the second ever by a Red Devil’s substitute, following in the footsteps of manager Solskjaer who netted four times off the bench against Nottingham Forest in 1999.