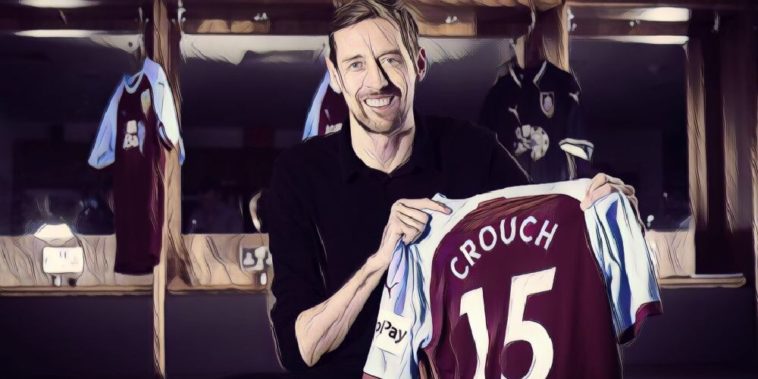 One of the Premier League’s ultimate journeymen is back on the move, as Peter Crouch returns to the top-flight after completing a short-term move to join Burnley.

At the ripe old age of the 38, Crouchie is back in the big time, with Burnley becoming the eighth Premier League club of his career.

The striker, formerly of Spurs, QPR, Portsmouth, Aston Villa, Norwich, Southampton, Liverpool and Portsmouth, has completed a permanent transfer from Stoke City to join Sean Dyche’s side, a deal which his seen Sam Vokes move to the bet365 stadium.

Crouchie is one of just 28 players in the famous Premier League 100 club having scored 108 top-flight goals, and speaking after making his transfer to Turf Moor, the veteran admitted that he is looking forward to adding to his goal tally.

“I still want to achieve things. I want to get more games in the Premier League and I would love to add to the 100 Premier League goals,” the former England striker told the official Burnley website.

“If I can add to that and get up the list that would be great as well, and hopefully that will all cumulate in Burnley moving forward.

“It’s a club that is stable in the Premier League now. We’ve got to make sure we stay there this year and build on that.

“For me it’s a great place to be and I’m really excited to get started.

“My game has probably changed a little bit. I’m not 25. But my attributes haven’t waned. I never really had blistering pace, so I haven’t lost that.

“I know I can impact games at this level. I scored goals last season in the Premier League and I know I will do the same again if given the opportunity this year.

“I’ve got to work very hard. We’ve got a good side here at Burnley and certainly some good strikers as well.

“I’m looking forward to working with them and I look forward to hopefully playing enough games.

“And I know that if I do play enough games, I can have an impact and a positive effect at this football club.”