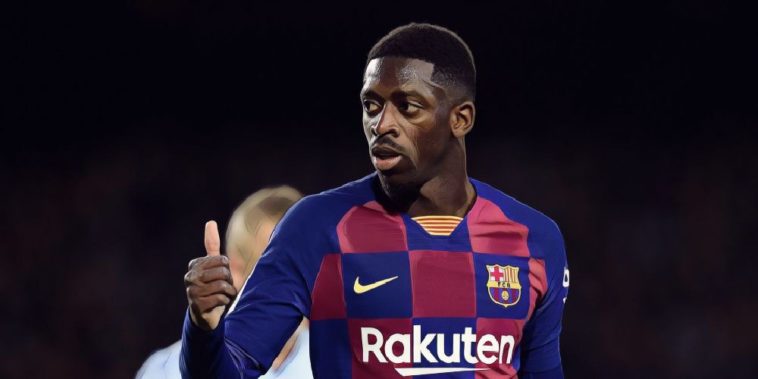 Manchester United have reportedly ‘sounded out’ Ousmane Dembele as a potential alternative to Jadon Sancho after Dortmund declared the youngster would not be leaving the club on Monday.

“We plan on having Jadon Sancho in our team this season,” Borussia Dortmund chief Michael Zorc declared. “The decision is final.”

A strong, headline-hitting statement indeed, although whether or not the decision is as final as Herr Zorc makes out is yet to be seen – the Dortmund sporting director having form for such sweeping statements in the past, declaring that neither Ousmane Dembele or Pierre-Emerick Aubameyang would be leaving the club just weeks before their respective departures to Barcelona and Arsenal respectively.

Reports claim that Manchester United are unperturbed by Dortmund’s currently bullish stance, and will still look to strike a deal for the England international, with the transfer window still open for the best part of two months.

However, according to ESPN, the Red Devils do have a backup plan as they look to bolster the right-hand side of their attack, holding ‘informal talks’ over Barcelona’s Ousmane Dembele, even in spite the Frenchman’s struggles since moving to the Catalan club.

July 2017:
? Michael Zorc – “Dembele has a long contract. He will definitely play with us next season.”

January 2018:
? Michael Zorc – “Aubameyang will stay until summer. His camp understands this.”

The 23-year-old has struggled to hold down a regular place in Barcelona’s star-studded line-up, making just 74 appearances for the club since his move in 2017, the winger having struggled with a number of injuries.

He last featured for the Blaugrana back in November 2019 before undergoing surgery on his hamstring in February of this year, with Barcelona now said to be ‘open to offers’ for the forward they paid Dortmund £135m for.

The report claims that talks have centred around a season-long loan with an obligation to buy, although no official approach has yet been made, with Sancho still the club’s number one priority.

It would seem somewhat strange for United to commit themselves to such a deal with an obligation to buy considering his injury troubles, although when fully fit and firing Dembele is certainly the calibre of player that would improve United’s attacking options.