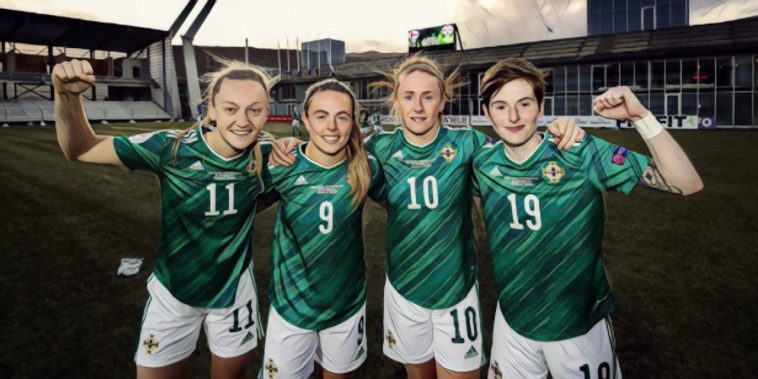 Although it receives less media attention than men’s football, women’s football is increasingly followed. The Irish FA recently declared that women’s football has never been so popular in Northern Ireland, this is a trend that should continue to be encouraged.

To date, the Northern Ireland women’s team has never participated in a World Cup or European Championship finals but not for long: on 13 April 2021, it made history by beating Ukraine at Seaview to reach the finals of Euro 2022 in England.

Marissa Callaghan and Nadene Caldwell scored to give Kenny Shiels’ side a 2-0 win on the night and a 4-1 victory on aggregate in the two-legged play-off. And when they get to England in the summer of 2022 the senior women’s team will be in the mix along with the elite of women’s football in Europe and indeed the world.

The team was ranked 32 out of the 47 nations who participated in the qualifiers for the European Championship finals, which were originally due to take place this summer but rescheduled to 2022 due to the Covid pandemic.

Based on co-efficient rankings, Northern Ireland will be in pot four in the main draw along with Iceland, Russia and Finland, so they will not be coming up against any of those nations in the group stages in England.

This will be an opportunity to bet on the outcome of matches and experience the thrill of the game more intensely. And to place your bets efficiently, what’s better than Squawka.com’s accumulator tips? Indeed, with this acca, you can place multiple odds within a single stake for each betting selection.

Which means that you increase largely your potential winnings. Plenty of different markets are available to bet on, and some bookmakers give you advice on live platforms to help you with betting on the right market at the right time. And with all the competitions that are coming, while it is on women’s or men’s football, or regional, national or international competitions, you have plenty of choices to bet on your favourite football team or player!

What if you tried your hand at an acca betting with the Euro 2020 competition that is coming soon? Let us know what do you think about it! This can also help in the promotion of women’s football, so keep it in your mind!

The Irish Football Association has launched a new strategy aimed at boosting the development of girls’ and women’s football in Northern Ireland. The plan covers the period 2019-2024 and sets ambitious targets to increase women’s participation levels.

One of the key aims is to double the number of registered female players from 1600 to 3200 over the next five years. It also provides a framework to strengthen women’s clubs and their volunteer base, improve infrastructure, promote leadership and effective governance and to encourage more women to take up coaching, refereeing or administration roles within the game.

Using the power of football for health, education and social development, boosting the domestic game, raising the profile of girls’ and women’s football and striving for better performances at international level are also among the goals within the strategy.  Find out more about the Irish Football Association’s work for youth and women’s football here.