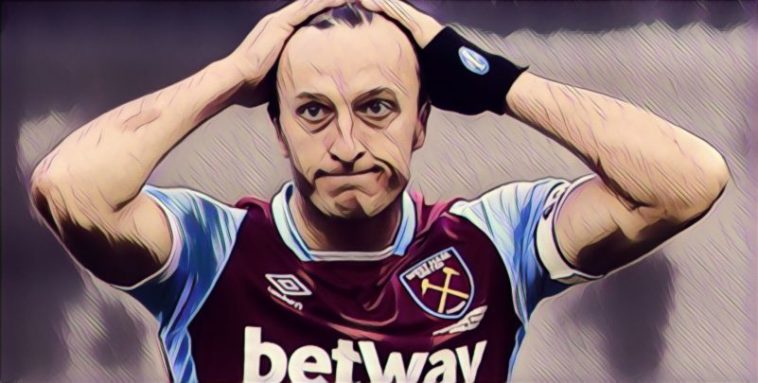 Mark Noble has reacted to West Ham United’s shock exit from the FA Cup fourth round at the hands of AFC Wimbledon.

The original Wimbledon FC were no strangers to cup upsets, and the current incarnation are doing their best to emulate them.

While it is unlikely the Dons will repeat the cup success of 1988, they will have at least come away from this year’s tournament with a big scalp, no matter what happens now.

That scalping came at the expense of West Ham United, who were certainly not expected to lose 4-2 to League One’s bottom side on Saturday.

Mark Noble came out bitterly disappointed after the game, pointing to the side’s lack of consistency over recent weeks.

“We didn’t play well at all until we made some changes, but apart from that we were poor.

“I said numerous times that when you turn up at a place like this you’re going to have to fight before you can try and play and do the nice stuff, but we keep shooting ourselves in the foot.

“We keep getting good results, and then go away to Burnley, go away to Bournemouth and not pick up the results we need to, or show the teams as much respect as we should and that’s what cost us today.

Noble admitted that the players did not fight as hard for the victory as their Wimbledon counterparts:

“It shouldn’t matter whether they’re up for it or not if we play to our capabilities. If we fight as hard as them they shouldn’t be able to beat us, but we didn’t do that and that’s why they won.

“Now you look to the Premier League and Wolves away is another tough game. We’ll get going this morning, assess the players and obviously we’ve got to put this behind us now and concentrate on the league.

“We’re ninth at the minute so we’re sitting well but you want a cup run and Saturday wasn’t good enough. Everyone knows that and we’ve got to put it behind us.