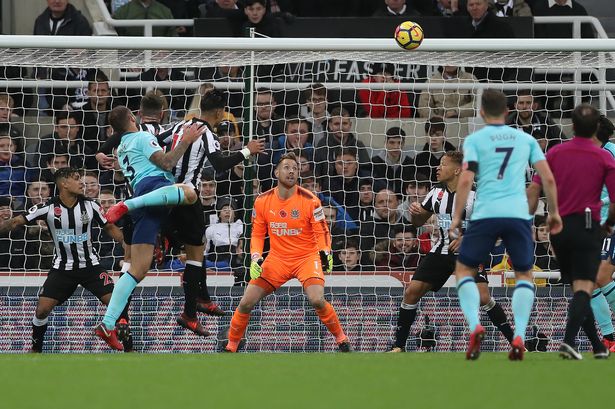 A late header from Steve Cook sent Bournemouth fans into rapture and lifted them out of the relegation places.

Dwight Gayle had a goal controversially ruled offside and Matt Ritchie hit the woodwork for the Magpies who have now won just one in their last six.

The South-Coast side should have taken the lead earlier through Callum Wilson, but his shot hit the side netting, while Pugh hit the post late on.

Magpies looked for inspiration but lacked any real quality after an exciting first 20 minutes with the EX-Bournemouth player – Ritchie their main creator.

Then in the 16th minute, Ritchie picked up the ball took a touch and curled the ball beyond Begovic who was saved by the post then the offside flag when Dwight Gayle tapped the ball home. However, Home fans were left bemused by the decision as Gayle was level when the ball was played.

The Geordies stayed in control but struggled to break down a resolute defense with Cook and Nathan Ake making fantastic blocks to deny Atsu and Gayle.

35 minutes in and Bournemouth had their first chance of the game when Callum Wilson got on the end of a dangerous cross but his header was matched by Rob Elliot.

After the break, Bournemouth grew into the game but not before Newcastle’s only chance of the second half – Ritchie’s corner met by Joselu at the back post who headed the ball into the ground but Begovic had no trouble pushing the ball over the bar.

Wilson then had the best chance of the game as he was played through one-on-one with Rob Elliot but appeared to panic and curl the ball wide.

The second half was very drab and neither side looked like creating a chance for approximately 35 minutes when Gayle and Perez nearly created a few half-chances but were met by a stern defense.

Then came a Bournemouth onslaught which saw Newcastle fail to get out of their own half for the better part of eight minutes. Pugh had a great chance as he danced beyond the Newcastle defenders put the ball past Rob Elliot but a trailing leg by Ciaran Clark pushed the ball onto the post. Fantastic defending saved Newcastle’s blushes or at least they thought.

Substitute Jermaine Defoe had a fierce effort saved from Rob Elliot when getting the benefit of an offside call. Newcastle failed to regroup for the corner and the first bit of quality won Bournemouth the game when Cook met a perfect delivery and headed the ball home giving Elliot no chance.

For Newcastle, the late defeat was insult to injury after captain Jamaal Lascelles and Christian Atsu were forced off with knocks. However, for Bournemouth, this could be the catalyst to really start their season stealing a win when they were far from their best.