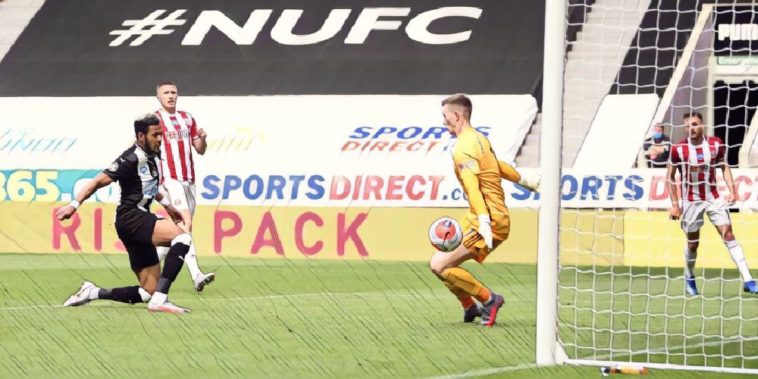 As has been the case with a lot of the games since the Premier League’s restart, the first half at St James’ Park was a dull, goalless affair, with Newcastle striker Joelinton fluffing his lines in front of goal with a miserable effort in what was the best chance of the opening 45.

Thankfully, the game certainly became more interesting after the break, with John Egan being given his marching orders just five minutes after the restart following a tussle with Joelinton, receiving a second yellow card following a first-half spat with the Brazilian.

Five minutes after going down to 10 men, Sheffield United found themselves behind, the lively Allan Saint-Maximin opening the scoring after capitalising on a dreadful mistake by Enda Stevens in the box, the Irishman failing to deal with a tame cross across the box.

Before Enda Stevens made this horrendous error to allow Allan Saint-Maximin to fire #NUFC ahead! pic.twitter.com/ZMgQxas0Li

Matt Ritchie made it two in the 69th minute with a rasping strike from the edge of the box, on-loan Manchester United ‘keeper Dean Henderson being left helpless to deal with the curling, outside-of-the-boot effort.

With Sheffield United having already played their opening game on Wednesday evening, and down to 10 men, the Blades looked far from their usual selves and were handed their heaviest defeat of the season when the much-criticised Joelinton scored just his second Premier League goal of the season, tapping in Miguel Almiron’s cut back from six yards out with 12 minutes to play.

“After the restart the one thing you want to do is get off to a good start,” Bruce said in his post-match press conference. “We’ve got our big players playing at the top of the pitch and as we’ve seen today they can be a threat.

“The preparation we gave the players looks good and they looked in really good nick which we’re pleased about and you need a result when it’s like that so that helps everybody.”

"We're all delighted for him. He probably suffered more in the lockdown, he had no family over and he was stuck in an apartment somewhere. It's been difficult for him but I'm delighted for him because he's a really good pro and he can only get better." pic.twitter.com/cn7JkBzp2r

On the performance of man of the match Saint-Maximin, Bruce added. “Some of the stuff he does isn’t coachable – it’s just natural ability. Whether he’s dribbling round his dogs or his mates, who knows, but If he keeps improving it’s limitless to what he can achieve. He’s one of the most naturally gifted players I’ve worked with.”

Meanwhile, Chris Wilder was less than impressed with referee David Coote, his side picking up just one point from their opening two games following the restart.

“I’m sick and tired of people talking about European places and what we’ve done before, that’s gone for me,” said Wilder. “Six or Seven months of what we have been doing is history, I’m living for what is happening now.

“I thought we started the game off well, with more gears to come into the second half. I think the decision to book John [Egan] is ridiculous, absolutely ridiculous, and from their guy as well. I think the referee is sticking his chest out and wants to make a name for himself.

“I ask our centre forwards to jump into their centre half and not make it easy for them, so what Joelinton did was nothing bad from our point of view, and what John did was nothing bad, he was trying to quickly restart the game, what’s he meant to do? Nobody is hurt, they go head-to-head, just get on with it. If it boils over, then yeah, but the first part of it, there’s no bad tackles. It’s absolutely ridiculous. But then, he’s in a position from then on, any mistake, any mistimed tackle – as it happened – he’s off the pitch and the dynamics of the game change straight away.

“From that feeling at half time from being in control and being well in the game, all of a sudden makes it doubly difficult when Enda [Stevens] makes a mistake out of nothing. They had a lot of things going there way from then on in.”

The result moves Newcastle up to 12th, the Magpies now 11 points clear of the relegation zone, while Sheffield United once again failed to take their chance to move into fifth, the South Yorkshire side having slipped to seventh following Wolves win on Saturday.