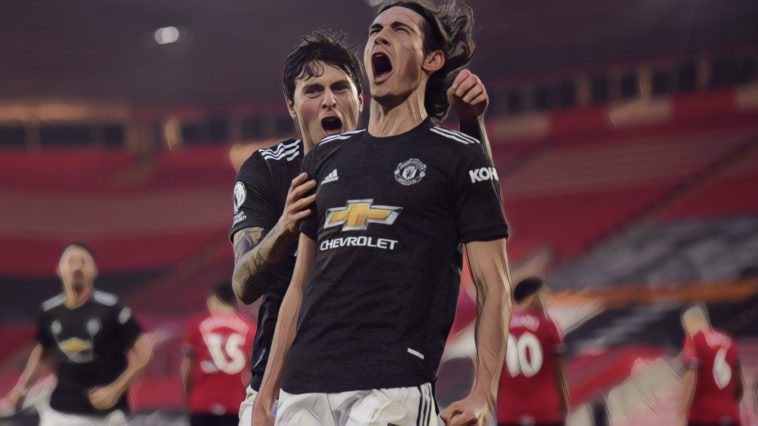 Gary Neville has outlined why Edinson Cavani is one of the best in the business following the forward’s stunning impact for Manchester United against Southampton.

Cavani came off the bench at half-time with Ole Gunnar Solskjaer’s side trailing 2-0 before inspiring a memorable comeback victory at St Mary’s, scoring twice in addition to providing an assist for Bruno Fernandes.

The Uruguay international has been one of Europe’s premier forwards for more than a decade and has shown he has lost none of his goalscoring instinct since moving to the Premier League, his match-winning display including two predatory headed finishes.

Neville has lavished praise on the veteran striker and hailed Cavani’s ability to lose his marker with a near post run, the 33-year-old twice getting across defenders to turn defeat into victory last weekend.

“He had a big impact,” Neville said on Sky Sports. “The interesting thing about his [first] goal, Cavani is one of the best at it, he has been for years.

“He did it against England in making that run in and around the near post. He does it all the time. He is always there, making that movement across defenders.

“As it comes to [Bruno] Fernandes, Manchester United have four players in this area, but the one that is on the move is the goalscorer, the one with the instinct.

“I talked about the near-post run [against Chelsea] and his first touch in English football is from a corner. He goes across the near post – which he will do every single time, you know it is coming.

“Against Southampton when the ball went out wide to the left, you are thinking Cavani is going to go in. You can’t believe Southampton, with three players around him, have not gone body-to-body to manage the run.

“As he runs in, he is one of the best in the business at it. Cavani has been doing it for years.”

Neville revealed that former Manchester United boss Sir Alex Ferguson had regularly told his strikers to unsettle defenders and goalkeepers with runs across the near post, and believes Cavani is amongst the best with his attacking movement.

“Sir Alex Ferguson used to say as a striker, you have to get across the near post to take the first defender away as he likes to position himself and cement his feet at the near post, but to also affect the goalkeeper and Cavani is the best at it.”