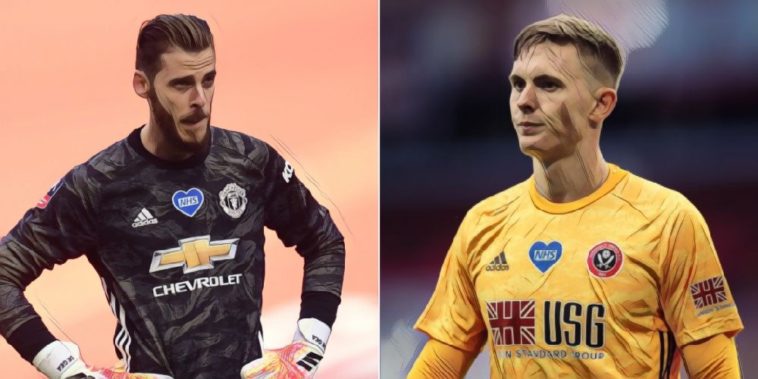 Gary Neville has explained why he is ‘worried’ about Manchester United’s goalkeeping situation this season following the return of loanee Dean Henderson to Old Trafford.

Henderson has returned to the Red Devils this summer following the second of two season-long loan spells at Sheffield United, the youngster starring during the Blades’ impressive return to the Premier League and winning plaudits for his performances at Bramall Lane.

The 23-year-old’s displays have seen him earn inclusion in Gareth Southgate’s England squad for this month’s Nations League fixtures with Iceland and Denmark, whilst United have been quick to secure his long-term future by agreeing a new and improved five-year contract.

However, Neville believes the uncertainty around the number one position could lead to ‘anxiety’ in the side, with added pressure on Solskjaer to keep both goalkeepers happy and maintain harmony in the squad.

“It’s an intriguing one and I’m a little bit worried about it,” Neville told Sky Sports.

“It looks brilliant on the face of it. You’ve got a goalkeeper in David de Gea, who has been world-class, absolutely no doubt about it. He’s been Manchester United’s player of the season in four out of the past six seasons, but just over the past 12 to 18 months, he’s definitely dipped below the levels he has achieved previously.

“You’ve then got Dean Henderson who has had a wonderful season and wants the England number one spot. He wants to be at major tournaments, he wants to play for Manchester United and he isn’t going to wait around.

“I always like a situation where you’ve got an established number one, who is fantastic, and you’ve got a very good number two, who knows his position.

“De Gea makes a mistake in week two, you know what the media are going to say, is this the moment that Henderson comes in? Ole is going to have that question hanging over him all the time, potentially, during the season. It’s something that is going to provide a challenge for him to be able to manage.

“The easiest thing in the world would be that they both play lots of games. Henderson plays in the cups and De Gea plays in the league. They’ve got an agreement of how it’s going to work this season and then there’s a transition in a year’s time. That might be something that could happen, but it doesn’t feel like that’s going to happen because De Gea will want to be number one, he’ll want to be the undisputed number one and Henderson will want his spot.

“It’s the one position where you can’t have uncertainty. You have to be definite with it because it really unnerves the rest of the team, the defence and the stadium. I believe it creates anxiety when the goalkeeper isn’t settled.”