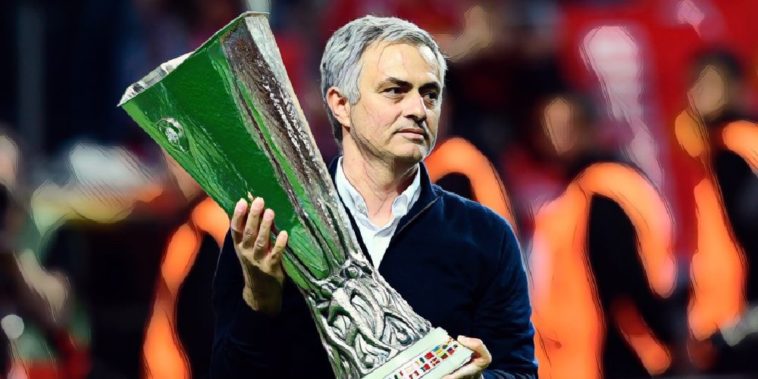 Jose Mourinho admits he is already focussing on steering Tottenham to Europa League success next season as he bids to motivate his side to secure continental qualification.

Tottenham remain in contention to qualify for next season’s Europa League, currently sitting seventh in the Premier League with two fixtures of the campaign remaining, the north London side hosting Leicester this weekend before a final day trip to Crystal Palace.

Two more victories should be enough to seal Spurs’ place in Europe for next season and Mourinho admits he is already planning his sides pathway to trophy success next season.

“In quite a funny way, I’m telling the players, two more victories to win the Europa League,” said the Tottenham boss at his pre-match press conference.

“I want the Champions League, the players played in a Champions League final. That’s the level of our club, of our stadium. That’s what the fans want, that’s what we as a club want. I’m just trying to motivate the troops because it’s very important to keep that motivation.

“It’s not possible that Sheffield United, Wolverhampton and Arsenal have more motivation than us to get one of these spots. Europa League is good, you can rotate players, it’s a fantastic experience for younger people that maybe Champions League comes too early for them. I think it’s good, I think we have to try that.”

A win against Leicester would hand two of Mourinho’s former sides, Chelsea and Manchester United, a huge helping hand in their pursuit of Champions League football, though the Portuguese is not concerned by the race for the top four.

“First of all, I’m not looking at that fight,” he said. “I don’t know mathematically what’s possible for them, I think they play the last game between them, I don’t know if things can be decided there.

“I don’t know if Chelsea are in a safe position, I don’t think they are. I think they are still in this fight, and if Manchester United does it, they’ll do it by playing very well in the second part of the season.”

Boris Johnson announces football fans could be allowed back in October