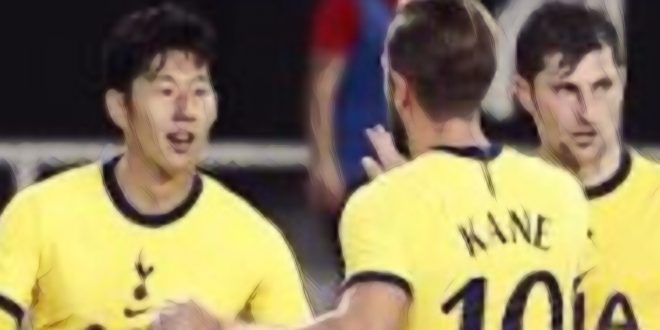 Manager Jose Mourinho has explained a bizarre incident regarding the size of the goals after Tottenham Hotspur’s 3-1 Europa League win over Shkendija in North Macedonia.

Tottenham were made to work for their win in the previous round against Lokomotiv Plovdiv and Thursday’s clash was no different, the Premier League side once again reliant on the quality of Heung-Min Son to progress to the next round.

Fresh off the back of his four-goal heroics at the weekend, the Korean international was quickly involved, setting up Lamela for an early opener, before the home side induced a scare with a delightful long-range equaliser from Valmir Nafiu early in the second period that ‘keeper Joe Hart could do little to prevent.

With the game finely balanced, Son once again came to the fore to put his side ahead, firing home from 12 yards after a Lucas Moura shot had been parried by the keeper.

Son then laid on an assist for Harry Kane to seal the victory, the England skipper heading home a fine left-footed cross. Despite naming a strong lineup Spurs struggled to ‘kill the game’ early on as Mourinho had hoped, with the Portuguese coach reflecting that while it was not a spectacular performance, his side simply ‘did the job’.

“We started very strongly and the thought was that we would kill the game but we didn’t,” Mourinho told his post-match press conference.

🔥 This guy in his last two games:

”They gave us a difficult match and the fear we felt after the equaliser was fundamental to the team’s reaction and then it was difficult for them to contain our attacking waves.”

“In the first half we were 41 minutes without scoring and then we gave them space to play. In the second half, after our changes, and I like to see players come in and make an impact and the players who came on made a difference.”

“We didn’t play magnificently but we did the job.”

While the game itself was potentially not the most entertaining affair, it did bring about a bizarre scenario in which the Spurs boss revealed that before the game he and his goalkeepers realised that the size of the goal was too small – although the former Manchester United manager did take it in good humour.

“Before the game was a funny situation because my goalkeeper told me the goal was small. I went to see and it was small,” Mourinho said.

”The goalkeepers spend all their time in them so we know. I felt immediately something was wrong and we got the UEFA delegate to come in and it was 5cm too small. We asked for goals of the right dimensions.”

Spurs are back in Premier League action on Sunday when they host Newcastle at the Tottenham Hotspurs Stadium.