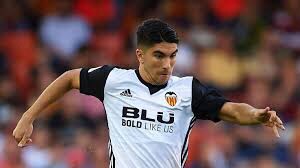 Valencia midfielder Carlos Soler has begged his club to allow him to move to Manchester United, according to reports.

The youngster has been linked with a move to Manchester United in recent weeks after making some scintillating performances for Los Che, as well as at Under 21 level for Spain. He has featured in every game for high flying Valencia this season, who are currently in second place, seven points behind Barcelona and three points ahead of the two Madrid sides, Real and Atletico.

His form prompted the La Liga side to tie the 20-year-old down to a new contract with a huge €80million release clause to try to fend off attention from Europe’s biggest clubs.

However, the Sun claim that they have been told by their sources that the midfielder has begged club officials to allow him a transfer to Old Trafford, after Jose Mourinho made signing him one of his priorities. Mourinho has been desperately short of creativity in midfield in the absence of Paul Pogba for the last two months. Pogba returned from injury during Saturday’s victory over Newcastle, with the Frenchman instantly making an impact with a goal and an assist.

Despite Soler’s bumper release clause, Manchester United are hopeful to strike a deal for around the £45million Mark, especially considering the Spanish side’s financial problems. They could also use Valencia’s interest in Andreas Pereira and Marouane Fellaini to their advantage.

However, speaking of the supposed interst from United, Soler recently told Cadena Cope:

“You already know it, I’m focused on Valencia.

“Regarding those things, I know nothing.

“It would be foolish to think about those things right now.”