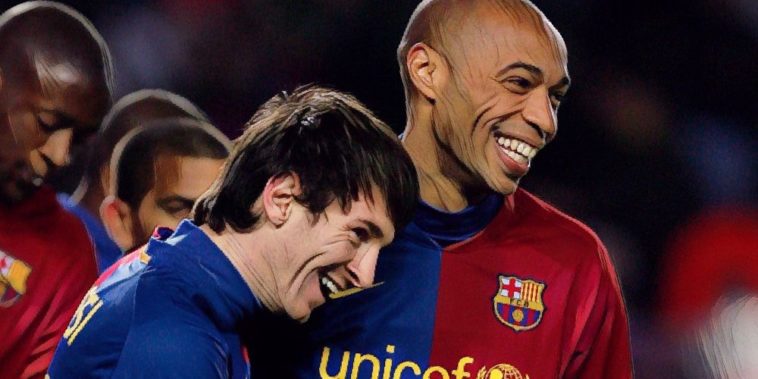 Lionel Messi has lavished praise on Thierry Henry and admits to being starstruck by his former Barcelona teammate following his arrival at the club from Arsenal.

Henry established himself as one of the best players in world football during a glittering eight-year career in north London, winning two league titles and being widely recognised amongst the finest players the Premier League has seen.

Arsenal‘s failure to win the Champions League saw the Frenchman bring his spell at the Emirates to an end, joining Barcelona in the summer of 2007, where he immediately made an impression on a fresh-faced teenager called Lionel Messi, who had begun to make his impression at the Camp Nou.

Messi has recalled his first meeting with Henry inside the Catalan side’s dressing room, the now six-time Ballon d’Or winner admitting to being starstruck by the presence of the forward following his impressive achievements in English football.

“The first day he entered the dressing room, I did not dare to look him in the face,” Messi told L’Equipe.

“I knew everything he had done in England. I had an image of him made and suddenly we were on the same team.

“What I feel for Titi may be a form of admiration.

“I loved Henry. The ease of finishing an action, how he takes the road to the goal and ends the play.

“He gives the impression that it is natural. His career, his dribbling, the last gesture. It is fluid, proportionate.”

Henry spent three seasons with Barcelona and scored 49 goals in 121 appearances for the Spanish side, featuring alongside Messi in a side which won a La Liga, Champions League and Copa del Rey treble in 2009.

Read – Arteta admits Arsenal may do ‘nothing’ this summer