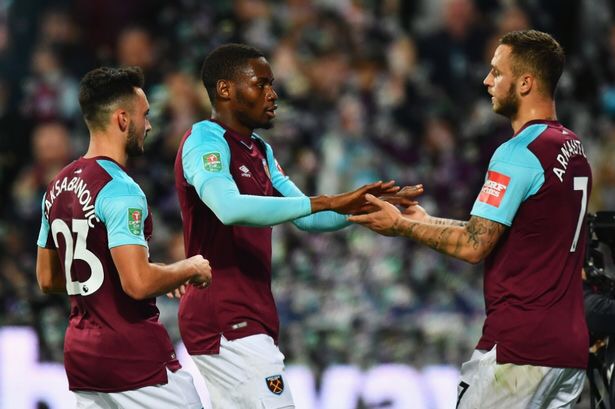 West Ham eased into the EFL Cup fourth round with an emphatic 3-0 victory over Championship side Bolton Wanderers at the London Stadium.

A headed goal by Angelo Ogbonna, from a Marko Arnautovic free kick in the 4th minute, set the tone for the Hammers easy win.

Further goals could have been scored in the opening stages as the Premier League side dominated possession and attacked purposefully. Andre Ayew had two chances before Arnautovic – the Hammers’ man of the match – set up Diafro Sakho for the second goal on the half hour mark.

A late 25-yard strike from full back Arthur Masuaku, in added time, made the final score 3-0.

Recently promoted Bolton Wanderers are currently the bottom side in the Championship and they have failed to win any of their opening eight league games.

Coming into last night’s contest in such poor form, it was no surprise that the Lancashire club were no match for West Ham.

Having lost their opening three league games, West Ham seem to have turned a corner after a win over Huddersfield Town and an away draw at West Bromwich Albion last Saturday. Last night’s win was the Hammers third clean sheet in a row.

After the match, Bilic was full of praise for Arnautovic who had his best game so far in his brief Hammers career.

The Austrian international, who signed for £25m from Stoke City during the summer, constantly caused Bolton problems. As well as providing assists for the first two goals, he also had a couple of chances to score himself.

“I could have asked for more. I want Arnautovic to do more. He has got that quality and that something extra.

“I like him as a player, but sometimes he gets happy with the few things that he does when I want him to push the borders.”