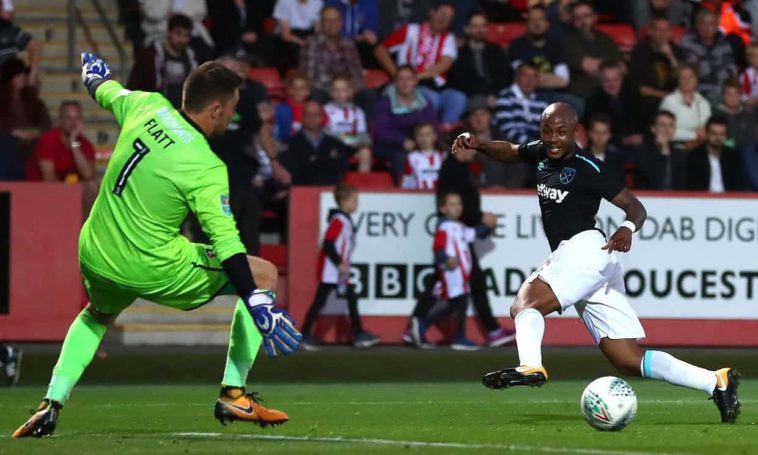 Two goals just before half time helped West Ham secure their first win of the season and a comfortable 2-0 victory against a determined Cheltenham Town in the EFL Cup second round.

Having lost their opening two league games of the season, the Hammers began the game quickly and looked to score an early goal to settle the nerves.

A front pairing of Andre Ayew and Diafro Sakho were lively and both had chances to score in the opening 15 minutes.

Cheltenham were slower to get into the game and their main threat was the long, high ball into the box. Hammers centre back, James Collins, playing his 200th game for West Ham on his 34th birthday, had an imperious match and seemed to get his head to every cross.

His heading was not only limited to the visitor’s box, as he was also a threat at West Ham corners and came close to scoring on three occasions.

As the half progressed, West Ham continued to press and Angelo Ogbonna’s fierce header was cleared off the line before, keeper Jonathan Flatt bravely stopped Sakho turning in Ayew’s low cross.

Having gone in at half time leading 2-0, the visitors started the second period on the front foot. More composure in front of the goal and they could have wrapped up the match with a third goal.

However, with twenty minutes remaining Cheltenham had their best spell of the game and Harry Pell’s low volley across goal, just eluded the onrushing substitute Dan Holman, who could not quite get the required touch as he slid in at the far post.

Ultimately, West Ham’s top division class showed as the Hammers eased the visitors out of the tie and saw out the last minutes of the game with little trouble.