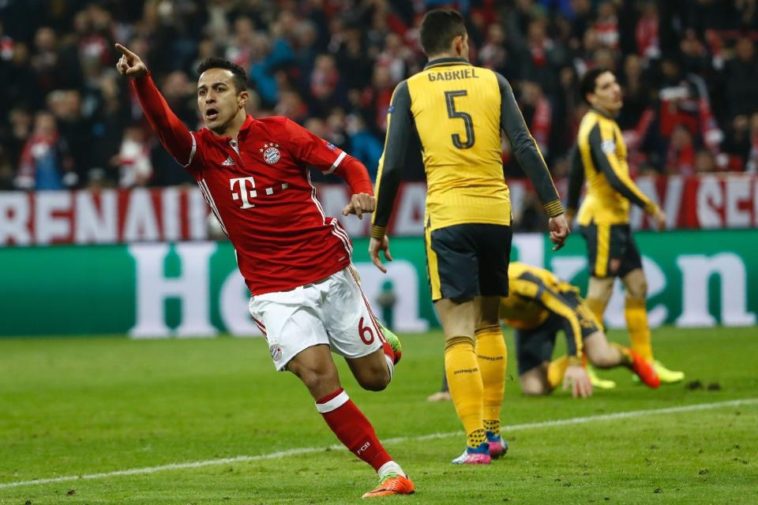 For the second season running, Bayern beat Arsenal 5-1 in Munich.

However, while last seasons humbling was in the group stage, this has effectively ended the Gunners’ interest in this season’s competition.

The decisive spell came in the first 20 minutes of the second half. Arsenal lost their captain to injury and shipped three goals, but Bayern’s firepower and cutting edge was the real difference on Wednesday night.

The warning signs came early for the North London outfit, as Bayern enjoyed early spells of possession. They tested David Ospina from long range via Arturo Vidal’s shot in the 8th minute. It was the 11th minute when Arjen Robben gave Ospina a taste of the typical world class Arjen Robben recipe to make it 1-0

Just seven minutes later though, Arsenal found themselves back in the game. Alexis Sanchez saw his penalty saved, but on the third follow up, he diverted the ball past Manuel Neuer.

The Gunners ended the half on a positive note. Sanchez played a nice through ball to Özil down the channel, but the German couldn’t overcome his counterpart, Neuer, from a tight angle

Arsenal couldn’t have hoped for a worse start to the second period. Captain Laurent Koscielny had to be withdrawn after suffering an injury, and replaced by Gabriel Paulista. Moments later, Polish striker Robert Lewandowski took full advantage of the Frenchman’s absence to head Bayern back in the lead from Philipp Lahm’s cross in the 53rd minute.

Three minutes later, Arsenal saw themselves in more trouble as Thiago scored made it 3-1 to the hosts. A delicate back-heeled assist from Lewandowski that left Thiago open ro score after being one-on-one with Ospina.

Javi Martinez promised more joy for the hosts in the 63rd minute when his powerful header was denied by Ospina, but the Colombian was left with little hope; when the home side eventually found a way through once more just seconds later.

From the resulting corner, the ball fell to Thiago on the edge of the box, whose strike took a wicked deflection off Xhaka’s leg to betray the Arsenal goalkeeper and add a second to his account. 4-1 and Arsenal had it all to do.

That 20 minute period after Koscielny went off was where Bayern really won the mental contest. They never gave time for the Arsenal defence to settle after Gabriel came on, and the damage was done. And when it looked like it could get no worse for Arsenal, it did. Chamberlain was dispossessed by substitute Thomas Müller at the edge of Arsenal’s box, with the German eventually adding the finishing touches to a night to forget for the visitors.

Where did it all go wrong?

For me, it all began with the team selection. Coquelin has had an awful run of games recently and there was no way you could actually start him in a game as important as this. Coquelin was replaced by Giroud in the 77th minute, as he managed to complete 5 successful passes in that 77 mins period.

Iwobi as well. He’s looked one of the bright and promising players of the Arsenal team this season but again, he doesn’t really look like he’s ready for a game like this. Especially when you have more maturity in Theo Walcott and Danny Welbeck on the bench. I still don’t understand what more Danny Welbeck has to do to get a game for Arsenal this season.

At half-time , it looked like the tie was perfectly poised, but Bayern annihilated Arsenal in the second half. The loss of Koscielny caused an absolute collapse in the Gunners’ back four. And whilst they were bad, Bayern were sublime at times. The eleven minute blitz in which they scored three goals was irresistible, and Müller added the icing on the cake late on.

They will go to London for the reverse fixture in buoyant spirits, and Arsenal will need nothing short of a miracle to turn this tie back in their favour. Game, set and probably match to Bayern Munich as Arsenal fans see their side getting knocked out of the Champions League Round of 16 for the seventh year running.