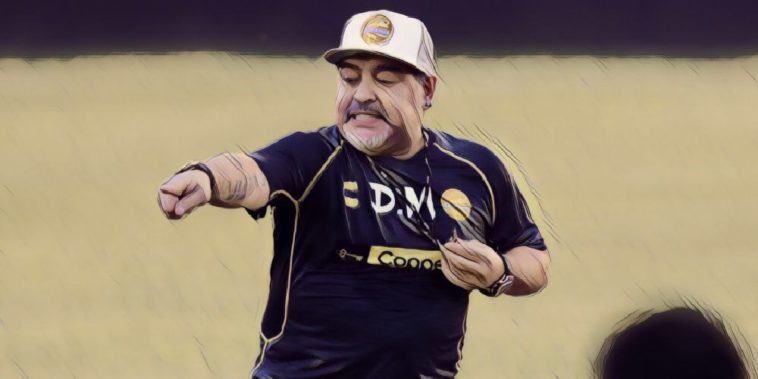 Never short of self-confidence, Argentine legend Diego Maradona believes he is ‘the man’ to turnaround the fortunes of Manchester United.

The 58-year-old is currently the manager of Mexican second-tier side Dorados, and has been discussing Manchester United‘s shortcomings this season as Ole Gunnar Solskjaer’s side missed out on Champions League qualification.

Despite having achieved little in a managerial career that includes spells at clubs such as Emirati side Fujairah FC and Dubai-based Al Wasl, Maradona remains somehow convinced he is the coach to revive the fortunes of one of Europe’s elite.

“If Manchester [United] need a coach, I’m the man to do it,” Maradona said in an interview with FourFourTwo magazine.

“I know they sell lots of shirts around the world, but they need to win trophies, too. I can do that for them.

“Manchester United used to be my favourite English team for so long,” he added. “So many great players and a great team under Alex Ferguson. But now I have to say Man City. I know you shouldn’t change like that but it’s because of Kun [Aguero]. We speak a lot and he plays in a very good team.”

The Argentina legend has questioned United’s decision to allow Ander Herrera to leave on a free transfer, but seemed less than impressed by club record signing, Paul Pogba.

There ain’t no party like a #Maradona party ! 😂😂😂 pic.twitter.com/vOHeknylSw