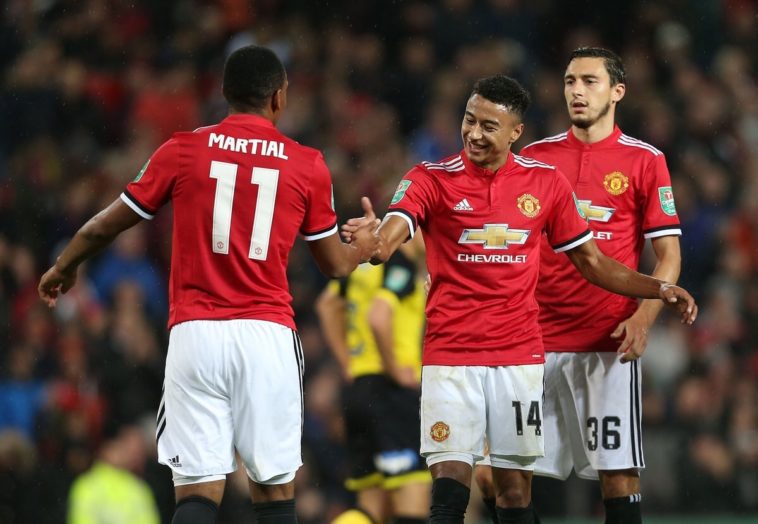 Manchester United got their defence of the Carabao Cup underway with a comfortable win against Championship side Burton Albion.

There were plenty of changes by both sides with United making nine changes to the side that beat Everton on Sunday, with only Juan Mata and Marcus Rashford keeping their place. As for the Brewers, who’s main focus is maintaining their status in the second tier of English Football, they also made a number of changes.

United got out of the blocks in super quick time for the second time in a few days. With just four minutes of football played, Michael Carrick, making his first start of the season, played a lovely ball into the box. The ball was gently touched by Jesse Lingard into the path of Marcus Rashford who expertly lifted the ball over Connor Ripley in the Burton goal to make it 1-0 to the holders.

Moments later, it was almost 2-0. And we Herrera won the ball, advanced up the field before playing it to the overlapping Jesse Lingard. Lingard moved into the box, and unleashed a shot which was heading in if it wasn’t for a good block by Burton Albion defender Tom Naylor.

United did eventually double their lead in the 17th minute, and it was that man Rashford once again. Left back Daley Blind played a ball into England international, who had dropped in slightly deeper. A quick turn, a look up, and Rashford fired it in off the near post past Ripley from all of 20 yards. A fine goal, and United were flying!

In the 22nd minute, Rashford had the first sniff of his hat trick. A lovely slide rule pass into the channels found the on rushing Rashford, who beat his man for pace, but was challenged in the box by Ben Turner as he was about to pull the trigger.

Moments later, Antony Martial worked his magic down the left. He beat his man with his wonderful quick feet before playing it to Juan Mata, whose first time effort was saved by Ripley. United were really getting into their groove.

However the Brewers gave United’s back line something to think about on the 25 minute mark. A ball up to Luke Varney found its way to Joe Mason, who found himself one on one with Sergio Romero, but  the Argentina number one saved the day.

Moments later, United came close to making it 3-0. Some wonderful trickery from Juan Mata opened up the Burton defence, but the Spanish playmakers strike cannoned off the post and back into play. Matteo Darmian kept the ball in play, chipped it into the box to Anthony Martial, who’s acrobatic overhead kick was heading into the goal, only for Flanagan to get a crucial block to keep Burton in the tie.

United did eventually get the third goal through another England international, Jesse Lingard. A hopeful strike from outside the box took a wicked deflection off of Turner before trickling into the back of the net to make it 3-0 to the Red Devils.

United changed their shape at half time, switching to a 3-4-3, with Luke Shaw replacing the influential Juan Mata at the break.

The returning left back thought he had made it 4-0 within four minutes of his comeback, when the linesman correctly adjudged Shaw to have been offside, following a lovely run down then left before slotting into the goal.

It was a relatively slow start to the second half, but on the hour mark, United made it 4-0.

Jesse Lingard played a nice ball forward to Anthony Martial, who played a one-two with Marcus Rashford which released the Frenchman in acres of space. With the whole goal to choose from, he kept his composure and slotted the ball past Ripley to score his fourth goal of the season and United’s fourth of the night.

With the tie all but over, the chances started to dry up. Anthony Martial continued his excellent form, with his electric pace and his trickery causing Burton problems throughout the encounter.

He almost had his second late into the second half, but saw his free kick ripple the side netting with the keeper left flat footed. He will be disappointed to have finished the game with only one goal, as his performance warranted more.

Then, as the game entered the only minute of added time, Burton did what no other side had done at Old Trafford this season, by scoring a goal.

A lovely ball in met the head of Mason, but the ball came off the bar. It dropped to substitute goalkeeper Joel Pereira who spilled it into the path of Lloyd Dyer, who smashed the ball into back of the net, sending the 3,000 travelling Albion fans home with something to cheer about.

However it was too little too late, with United cruising into the fourth round of the Carabao Cup.