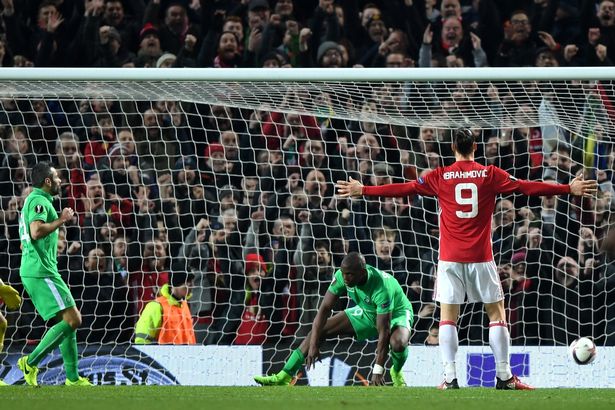 Manchester United placed one foot in the Europa League Round of 16 as Zlatan Ibrahimovic’s hat-trick secured a 3-0 win at Old Trafford.

The Swede scored a first half free-kick, then added to his tally with a tap-in and penalty in the second half to give United a huge advantage going into the away leg next Wednesday.

A strong United side

Probably the best atmosphere at Old Trafford in long time, the French fans were in full voice and were excellent the whole game. And it was the visitors who started quicker under the Old Trafford lights. A mix-up between Ander Herrera and Eric Bailly allowed the energetic Romain Hamouma through on goal, but Romero closed-down the angle as United were able to clear.

United then calmed down and thought they were ahead through Fellaini, but Juan Mata was flagged offside in the build-up. Anthony Martial, who was lively all night, had his long-range shot pushed away by Stephane Ruffier.

Not too long after and United were ahead. After originally winning a soft free-kick, Ibrahimovic took the set-piece which deflected off Vincent Pajot and rolled past the helpless Ruffier.

United should have been 2-0 up after Paul Pogba, who was playing against his older brother Florentin for the first time, chipped a delightful ball over the French side’s defence, but Mata’s voley was directly at the keeper.

It was Ettiene who finished the half stronger, as Henri Saivet twice went close to equalising for the visitors. United were lackadaisical when defending and were fortunate after Hamouma and Jordan Veretout both should have scored.

United needed something different and on came Jesse Lingard for Fellaini, as Pogba dropped into a deeper midfield role. They then had another goal rightfully disallowed as Ibrahimovic creeped offside before hammering home with a powerful header from Mata’s cross.

Pogba and Martial were United’s two standout players, as both came close to doubling United’s lead. A potential blessing in disguise arrived when Herrera was booked for handball, meaning that he will miss the away leg next week. A well-deserved rest for the Spaniard as he covered every blade of grass once again.

Martial’s fancy footwork won United a free-kick, which Daley Blind took and delivered an inch-perfect cross to Pogba, only for his effort to hit the woodwork (for the 8th time this season).

Saint Etienne did not cause as many problems in the second half, but should have been level when substitute Nolan Roux dinked the ball over the oncoming Romero, but could only find the roof of the net after United defenders were rushing back.

Marcus Rashford entered the fray, a year on since his debut for the club against FC Midtjylland in which he scored brace. Injecting some pace into the game, he smartly found some space and ran at the opposition’s defence, which saw his cross finding Ibrahimovic who converted from close range.

Perhaps the highlight of the night was the Stretford End singing ‘Chinos, Chinos, Chinos…’ to Etienne’s doctor who came onto the pitch wearing beige trousers!

The towering Swede grabbed his hat-trick from the penalty spot, as he sent Ruffier the wrong away and converted confidently to his left. 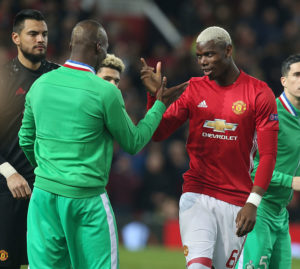 Zlatan Ibrahimovic now has 23 goals this season, and may get the chance to haunt the French side again next Wednesday in the reverse fixture.