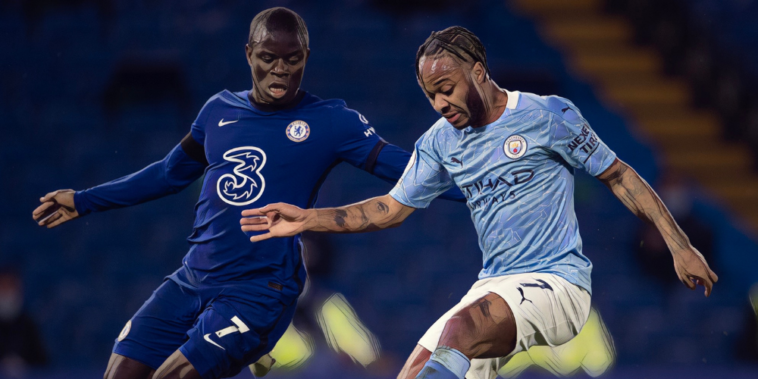 Champions-elect Manchester City host Chelsea on Saturday evening, in what will be a dress rehearsal for the Champions League final on 29 May.

Here’s all you need to know about that intriguing encounter at the Etihad:

After a succession of Champions League heartbreaks since Pep Guardiola walked in the door in 2016, Man City finally managed to secure their place in the final with a stunning second-leg display against Paris Saint-Germain.

Following their first-leg, second-half turnaround at the Parc des Princes, City went into Tuesday night’s clash at a snowy Etihad knowing the tie was firmly in their control, yet showed no signs of complacency, producing a breathtaking defensive performance to clinch their place in the showpiece.

While Mauricio Pochettino’s side made a lively start to the game, it was City who took the lead through last week’s hero Riyad Mahrez, before the former Leicester man added a second late on to secure the win.

Although it was the Algerian’s goals in the tie that made the difference, the key man on the night was undoubtedly Ruben Dias, the Portugal international producing what’s fast becoming a trademark display to repeatedly deny a star-studded PSG attack.

With the Carabao Cup already secured, this weekend’s game offers City the chance to create an unassailable lead to clinch a third Premier League title in four years, the prospect of a treble is well and truly in their grasp, with the Champions League final to come at the end of May.

As for team news for the clash, defender John Stones is still serving his three-game suspension for the red card he picked up against Aston Villa.

While not to suggest that it was an easy win, there can’t have been many more comfortable Champions League semi-final triumphs in recent memory than the Blues win over Real Madrid, Thomas Tuchel’s men in frankly complete control in the second-leg at Stamford Bridge on Wednesday night.

In truth, the 1-1 first-leg scoreline had somewhat flattered the 13-time winners, with Chelsea perhaps ruing a number of missed chances to put the tie to bed in the Spanish capital.

Although they were once again guilty of squandering glorious opportunities in the second-leg, goals from Timo Werner and Christian Pulisic ensured a relatively calm progression to their first Champions League final since 2012, setting up the second all-English final in just three seasons.

That superb display against the La Liga side is testament to just how far they’ve come in Tuchel’s relatively brief stint as manager, the German having already guided the club to the FA Cup final as well as looking a safe bet to secure a previously unlikely top-four spot, the club having been ninth when the former Borussia Dortmund boss was appointed.

As has been the case with a succession of managers in recent years, the brutal mid-season dismissal of Frank Lampard has paid dividends, although no one could have quite predicted just how dramatic an impact the change in manager would have.

As for this weekend’s clash, the only major injury concern will be that of Mateo Kovacic, the Croatian midfielder having been absent in recent weeks.

While City took all three points when the two sides last met in the league, the Blues exacted revenged just a few weeks ago, securing their place in the FA Cup final.

In what was a distinctly ordinary first-half at Wembley, the best chance of the half fell to Ben Chilwell, although the England full-back lashed his effort wide at the back post, while Hakim Ziyech’s early strike was ruled out for offside.

The Moroccan playmaker didn’t have to wait long to get his name on the scoresheet, however, turning home from a Timo Werner pull back to give his side the lead ten minutes into the second half.

With City restricted to minimal efforts on goal, the Blues hung on for victory to end their opponents hopes of securing an unprecedented quadruple.