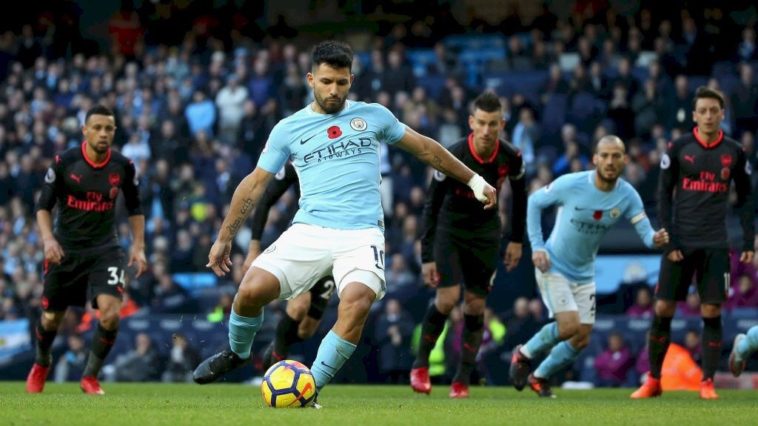 Manchester City maintained their unbeaten run and stayed top of the table with a 3-1 win over Arsenal.

Manchester City’s record goal scorer Sergio Aguero should have put his side in front within the first three minutes but his shot was parried by Petr Cech. Arsenal then had a chance of their own but Alex Iwobi’s shot from a free-kick was lashed high over the bar.

Leroy Sane cut open the Arsenal defence but his ball across the face of goal was not met by Raheem Sterling who was inches away.

Cech made a great save to deny Kevin de Bruyne but was unable to stop the Belgian’s second attempt, following a one-two with Fernandinho, as he broke the deadlock and put Man City in front. This was Man City’s 50th goal in all competitions this season. With an attacking force like theirs, it’s hardly a surprise.

After falling behind, Arsenal made sloppy mistakes and continually gave the ball away in dangerous positions. Raheem Sterling was through on goal with Sane to his left but he played an awful pass and squandered a fantastic chance. Sterling may have improved this season, but that was proof that he’s still not the finished article.

Minutes later former Spurs man Kyle Walker put in a dangerous cross and Cech did well to smother Aguero’s effort. Somehow Arsenal were only 1-0 down but that was more to do with City being wasteful.

Arsenal had their first shot on target at the end of the first half as Aaron Ramsey forced Ederson into action for the first time. Considering he had been a spectator for 45 minutes, Ederson made an excellent save from Ramsey’s low shot to ensure Man City maintained their lead.

Pep Guardiola’s side doubled their lead just four minutes into the second half. Man City were awarded a penalty after Nacho Monreal fouled Sterling and Aguero’s penalty went in off the post. The Gunners have conceded 12 goals from the penalty spot since the start of last season, more than any other Premier League side.

Off the bench, on the scoresheet

Once again, Alexandre Lacazette was left on the bench in a big game and once again it was a risk that didn’t pay off. The Frenchman was brought into the match in the 56th minute and scored nine minutes later to half the deficit. Ramsey picked out Lacazette who fired through the legs of Ederson. Why would you leave a £50m striker on the bench in the first place? Only Arsene Wenger knows.

Just before Arsenal scored, Aguero came off and Gabriel Jesus replaced him. The young Brazilian was denied by a sensational save from Cech as he looked to make an impact from close range. Jesus got his goal in the 74th minute. David Silva, who looked offside, found Jesus who slotted home with ease. Arsenal protested once the ball was in the back of the net, and while they had a strong case, they were guilty of not playing to the whistle.

Despite some fortunate decisions going Man City’s way, they deserved the lead and remain top of the table.