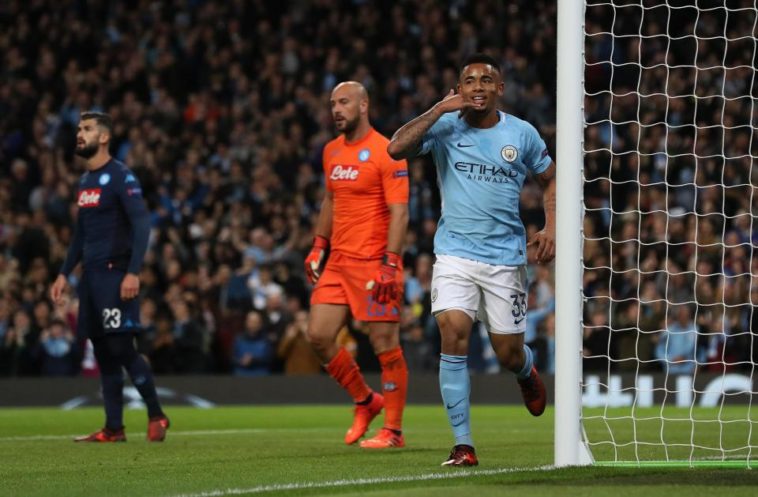 In what was a game of two halves, City dominated the early proceedings before Napoli took control of the second half, showing why they sit at the head of the Serie A table.

Earlier in the week, Pep Guardiola stated, “I am here to win, I am not here to entertain”. At the moment his team is doing both.

City started the game at a blistering pace, displaying the high pressing and scintillating passing that resulted in the 7-2 thrashing of Stoke at the weekend. With the ever brilliant Keven De Bruyne and David Silva pulling the strings in midfield and the deadly front three of Jesus, Sterling and Sané, City subdued Napoli in the opening 30 minutes.

It only took City until the ninth minute to grab the opening goal. David Silva’s jinking run to the by-line saw him cut the ball back to the edge of the six-yard box. Kyle Walker’s shot was blocked, but Raheem Sterling was on hand to coolly put away the rebound.

De Bruyne, arguably City’s best player this season, was denied a would-be wonder goal moments later. From the edge of the D, the brilliant Belgian saw his sumptuous left foot curler smash the underside of the bar and stay out, much to the relief of Napoli goalkeeper Pepe Reina.

Napoli survived another scare after 28 minutes after Gabriel Jesus’ shot on the turn was brilliantly blocked on the line by a combination of Reina and Koulibaly.

After this City seemed to slacken off and lost moment, allowing Napoli a route back into the game.

A golden opportunity came seven minutes before half time when Kyle walker brought down Raúl Albiol in the box. But City were let off the hook, as Ederson saved Dries Mertens’ penalty with his legs to see City keep their 2-0 advantage.

The second half saw Napoli’s Lorenzo Insigne replaced by Brazilian Allan, a substitution that changed the dynamic of the game.

With fresh legs in midfield Napoli were able to implement their high pressing and possession retention tactics that have been so successful this season.

City became sloppy in possession and it was only John Stones’ heroic block that prevented Marek Hamsik from capitalising on a clear cut chance.

Napoli did eventually find a way through however, as Diawara coolly converted Napoli’s second penalty of the night following a trip on Faouzi Ghoulam in the box.

But Napoli’s attacking prowess did not surface as they failed to find another goal, City’s resilience thwarting the Neapolitans’ attempts to capitalise on their second half dominance.

Despite City’s second half shortcomings, Guardiola was pleased with his side’s performance. “Today we won against an incredible team and to do that you have to make an incredible performance”, Pep said, adding, “they are one of the best teams I have ever faced, which is why I am so proud”.

The victory sees City continue their imperious form as they have now won 10 straight games. They also maintain their perfect record in the group, sitting top with nine points from three games. Napoli lie in 3rd place, three points behind Shakhtar Donetsk, meaning a win against City in Naples on November 1st is a must if they hope to progress.

De Bruyne was predictably excellent once again, pulling all the strings for City offensively while grabbing an assist. He was unlucky not to get on the scoresheet himself.