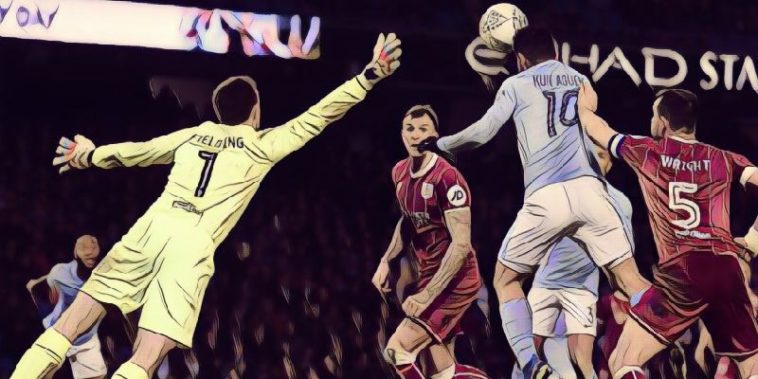 Manchester City snuck past Bristol City after fighting from behind at the Etihad to take a lead into the semi-finals. Here’s what we learned from the first leg.

Sergio Aguero is back, and with three goals in the last four days he’s reminding everyone what he can do. It hasn’t been the best of seasons for Sergio but he reclaimed his place as City’s top goalscorer with his nineteenth strike of the campaign to clinch the win late on. It was a magical cross from Bernardo Silva and a lovely finish from the Argentine, but it meant the final scoreline told a very different story to what was very nearly a shock draw.

I’m running out of words to describe Oleksandr Zinchenko but he was superb again tonight. The young Ukranian, playing a million miles from home and a million miles out of position, looked City’s calmest player at all times and almost never conceded possession. In the first half he showed what he was made of with some tough tackles, and in the second he got warmed up with some spectacular passing. Arguably the least-known name in City’s senior roster, the youngster is making a name for himself this season and giving Pep Guardiola something to think about.

Speaking as someone who’s seen every single Manchester City game this season, I can comfortably say that the visitors tonight were one of the best teams the league leaders have faced in a long time. They were organised, spirited and willing to go forward, showing their attacking prowess when they won and then scored a late first-half penalty courtesy of Bobby Reid. With a performance like that under their belt they can be confident of giving Manchester City another great game in the second leg.

I like Eliaquim Mangala. I really do. He’s a great guy, a professional and a hard worker, but too often during his spell in England we’ve been reminded of his biggest weakness- an error-prone streak that just wont go away. His awful mistake to give the ball away cost City the penalty from which Bristol City scored, and that wasn’t his only problem- at times tonight he looked completely uncomfortable with what he was being asked to do. And with respect to Bristol City you can only imagine that Mangala would struggle even more against a top team like Barcelona or Juventus. That certainly explains why Pep may be eyeing up Jonny Evans as a more reliable back-up this month.

One of the hallmarks of a top side is an ability to come from behind and win, and this is something that Manchester City love doing. On four of the last five occasions in which they’ve been losing at half-time, Guardiola’s men have gone on to win the game. In fact, even with the visitors 1-0 up at half time, there was a air of inevitability about the late Aguero goal that sealed the win for City. With a specialty like that in their lockers, every side facing City would do well to know that going a goal up is still a long way from securing a result…