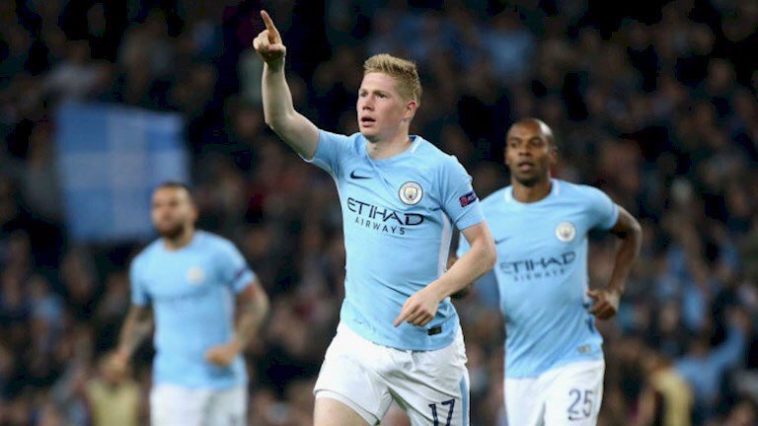 The Citizens made it two wins from two to top group F with maximum points, but the Ukrainians made sure it was no easy feat.

The visitors started the match brightly against a somewhat lethargic City side and on balance went into halftime on top.

Shakhtar’s Brazilian core were at the heart of their attacking play. Firstly Fred and then Bernard had seemingly clear cut chances snuffed out by the ever-solid former Shakhtar midfielder, Fernandinho. Moments later winger Marlos saw his curling effort brilliantly tipped round the post by compatriot Ederson.

The left side of Shakhtar’s attack seemed to trouble City in particular, with Kyle Walker struggling to cope with the trickery and overlapping runs of Bernard, Taison and Ismaily.

That’s not to say that Shakhtar completely subdued Guardiola’s men. City had moments when they could’ve and probably should’ve taken the lead.

On the half hour mark Gabriel Jesus slipped in De Bruyne, only for the Belgian to drag his shot wide of Pyatov’s near post. This was followed just before halftime by a jinking Leroy Sane run that saw the German sneak behind the Shakhtar back line, only for Sane to drag his effort agonisingly wide of the far post.

The second half had only just got going when City’s individual talent proved decisive.

David Silva drove forward towards goal from midfield after a picking up a wayward Shakhtar ball. With options streaming forward either side of him, El Mago cut inside and laid the ball across to De Bruyne, 25 yards out from goal. De Bruyne took one touch to set himself before unleashing an unstoppable curling effort into the top right corner of Pyatov’s goal.

The goal set the tone for the rest of the second half, as City began to dominate in terms of chances while Shakhtar were limited to trying to counter City with some pacey wing-play.

The score was only kept at 1-0 by a couple of excellent Pyatov saves, the veteran Ukrainian international proving his worth.

The ‘keeper bettered that save in the 70th minute when he guessed the right way to expertly tip Aguero’s penalty round the post.

But City would not need Aguero to seal the result, as substitute Raheem Sterling tapped in from a Bernardo Silva pull back late on to cap off a good night for City.

Despite City not steamrolling their opponents as many expected (City have netted 22 times in their last five games) there were plenty of positives to take from the victory.

John Stones continued to look composed and assured at the back, completing 101 passes, the most of anyone on the pitch. Likewise, Fernandinho excelled in his holding midfield role making four tackles, four interceptions and five clearances.

Out of position Fabian Delph appeared adept at left back, covering for the injured Benjamin Mendy. Manager Guardiola was more than happy with Delph’s display, stating, “For me, Fabian was man of the match”, adding “he controlled Marlos and did it very well”.

All in all it was a good day at the office for Guardiola’s team, who will benefit from a tough test before their eagerly awaited away encounter at Chelsea this weekend.

Man of the Match:  Fernandinho

The Brazilian defensive midfielder played brilliantly against his former employers, making a number of crucial tackles and interceptions in the first half.