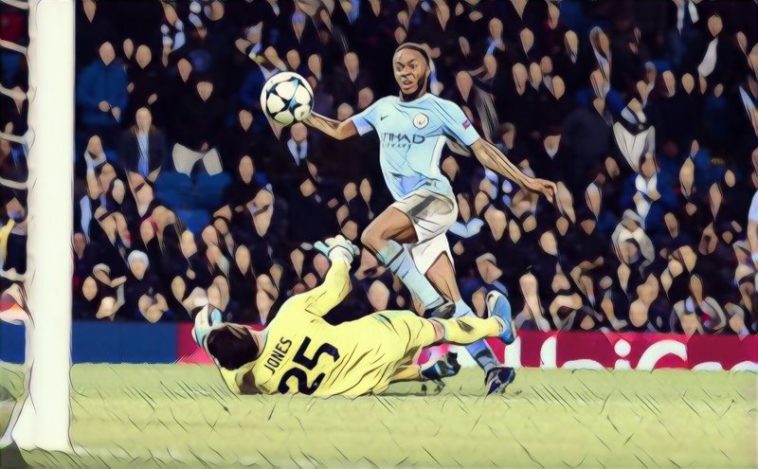 Raheem Sterling scored a 88th minute winner to extend Manchester City’s winning streak to 17 games as they became group winners with a 1-0 win over Feyenoord in the UEFA Champions League.

The build-up was a case of how many for the home side – and even six changes to the side that beat Leicester City on Saturday shouldn’t have made a difference.

“I will kill them” was the cry from the manager midweek when asked about potential complacency from his team, and it looked to be something that was creeping in after 20 minutes.

With Kevin De Bruyne, Yaya Toure and Bernardo Silva’s majestic feet, the creativity was coming from an inverted full-back Kyle Walker, who offered the pace and direction City needed.

Feyenoord opened up a chance on 29 minutes as winger Sam Larsson impressively shifted the ball in a tight space inside the box and curled half a chance just past Ederson’s left post.

The biggest chance of the game came after 36 minutes when Silva found himself through but his poor side foot finish went straight at Brad Jones – more of a pass than a shot from six yards.

The Eithad Stadium remained silent, but only in expectancy of the scoreboard changing once or twice before half-time.

The visitors remained solid at the start of the second half, like the first. Very rare attacks were to come due to the completed passes City were accomplishing, but notably with no purpose.

Sergio Aguero had the chance to break the deadlock, when a chip over the top from Silva found the Blue’s number 10 who sliced wide on the half volley after taking it well on his chest.

The 64th minute saw Gabriel Jesus enter the field for De Bruyne who will miss the last tie away to Donetsk due to his second booking in the competition.

The away side came close to open the scoring when Larsson cleverly scooped a ball over the City back-line for Steve Berghuis, who’s effort was parred over by Ederson.

The home team were fortunate that Napoli were on the verge of defeating Donetsk, which meant City would finish group winners, but the Etihad-outfit’s winning streak was still in jeopardy.

But the breakthrough came on the 88th minute when Sterling’s simple one-two with Ilkay Gundogan ended in an excellent lob into the top corner from the Blues number seven.

Delight for the supporters and in particularly Guardiola, who looked his animated self on the touch-line for most of the game. It wasn’t City at their menacing and clinical best, but a win is very much, a win.

City now face Huddersfield Town at the John Smiths stadium in the Premier League on Sunday, where they will look to continue their unbeaten run.