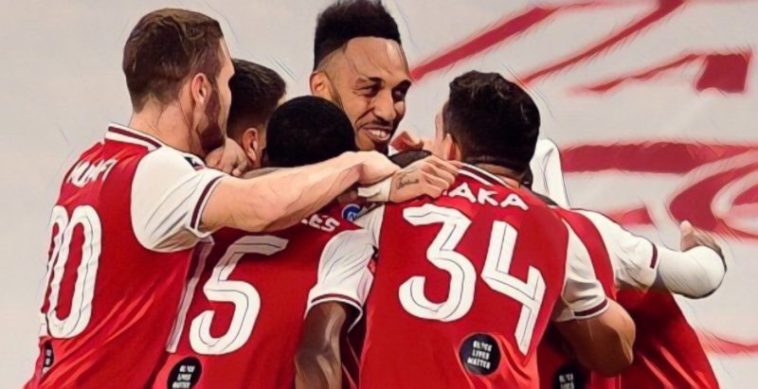 A brace from talismanic striker Pierre-Emerick Aubameyang will dominate the headlines, although this was an excellent display from the Gunners built on tactical discipline and defensive resolve.

Arteta got his tactics spot on against his former boss Pep Guardiola, and just like in their 2-1 win over Liverpool in midweek, it was obvious to see that the young Spanish coach has already instilled the type of defensive discipline his side has been sadly lacking in recent seasons.

Speaking afterwards Gunners centre-back David Luiz – who put in his finest display in an Arsenal shirt – paid tribute to the spirit his side showed to seal victory over such a fearsome opponent.

“It was a great result against one of the best teams in the world. We were humble, we understood the way we had to play and we took the opportunities to score,” Luiz told BT Sport.

“We have to be mature, to understand what level we are in the process. We have an amazing coach but we can’t go from 0 to 100. We are improving. The spirit was great and I’m happy for the team because they deserve it.

“All the team defended, it is not just the last line. Everybody has to fight and play every ball 100%. It’s part of the process. We could do more of this in the game so it would maybe be easier. The other team is miles away in front of us but we were humble so when we play we can hurt the opponent and we did that.”

Luiz had been on the end of some stinging criticism after his disasterclass of a performance against tonight’s opponent in the first game after the restart, but the Brazilian insisted that it’s all part of football and he’s hoping Arsenal can get their hands on the FA Cup trophy on the 1st of August.

“It is part of the football. I understood that football is about surviving. Every day you are going to defend the odd thing. I was working hard every single day after my mistakes. I was humble to work more and to work more for the team.

“We have a final to play this season and we will try and win a title for this club because this club deserves to win a trophy.”

The Gunners will face either Manchester United or Chelsea in the showpiece event on 1 August, with the two sides semi-final taking place on Sunday evening.