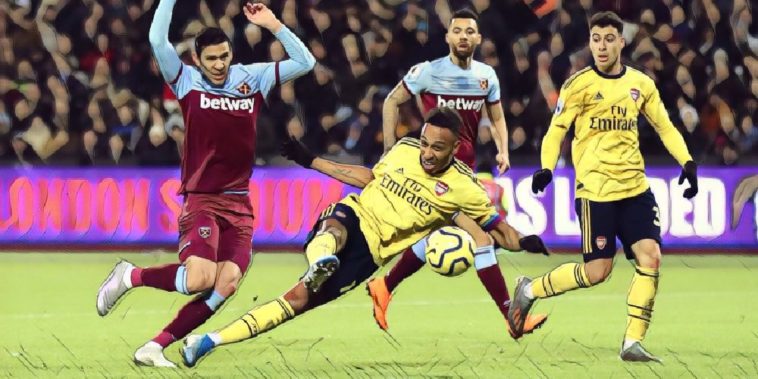 Arsenal finally got that winning feeling back, coming from behind to beat West Ham 3-1 at the London Stadium.

West Ham took the lead in the first-half through Angelo Ogbonna, though the struggling Hammers were unable to produce a repeat of their performance against Chelsea a week ago, the Gunners scoring three unanswered goals within nine second-half minutes to move back into the top half of the Premier League.

On 69 minutes, the game was all but over, captain Pierre-Emerick Aubameyang striking a lovely volley from inside the box to secure a 3-1 win, ending an eight-match winless run which had stretched back to October.

It’s the first time @Arsenal have won having been behind at half-time since 2011❗️ pic.twitter.com/Kbg64JSsx0

The win was the first under interim manager Freddie Ljungberg, and speaking after the game, the former midfielder was full of praise for his players.

“It means so much for the players and I’m delighted for them,” he told Sky Sports. “They’ve been playing under immense pressure. I could feel West Ham getting tired and our passing was getting crisper. We sliced through them and the result is amazing.

“Football throws a curveball at you all the time and the players responded. West Ham got tired and the boys stepped up. They worked so hard and in the Premier League, you have to.

“It’s all down to the players – I’m just there to guide them a little bit.”

Speaking specifically about club-record signing Pepe, Ljungberg was delighted with the Ivorian’s work rate, and tipped him to start to justify his hefty price tag.

“Nicolas is an amazing footballer, but it’s not easy to come from the French league,” he said. “He was really tired at the end and worked his socks off. He’ll get better and better.”

The result moves Arsenal up to ninth, just two points behind fifth-placed Manchester United, though they do have the tricky task of a home game against Man City next weekend.