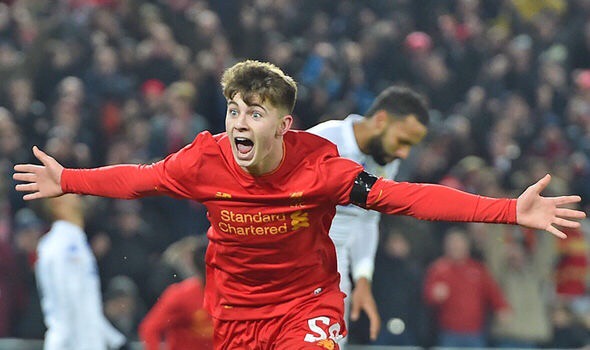 Liverpool starlet Ben Woodburn is set to be offered a bumper new deal as Jurgen Klopp looks to keep the youngster at Anfield.

The youngster announced himself to the world this week with a stunning goal on his international debut for Wales in this week’s World Cup qualifier against Austria. He then topped off a fine week by creating the opening goal as Wales beat Moldova to go second in Group D.

17-year-old Woodburn currently earns £40,000-a-year in line with Liverpool’s wage structure for their academy prospects, but looks set to be rewarded with a bumper new deal. The new deal will reportedly see the youngster see his current £40k-a-year salary increase by over 3000% to £1.3m (£25,000-a-week).

The new deal should be signed when the player turns 18 on the 15th October.

Former Liverpool and Wales striker Craig Bellamy told Sky Sports that he expects the exciting forward to get game time for the Reds this season.

“I do see him getting game time at Liverpool. He fits in to what Liverpool do going forward. They rate him very highly and I would like to see him get game time with all the competitions, especially the business end of the season.

“Already he has made a huge impact for a 17 year old, but you look at the competitions Liverpool are in – Champions League, League Cup, FA Cup, league – there is going to be game time there.”

He has made just five senior appearances for Liverpool, where he is the third youngest player to ever wear the famous red shirt. He is also the club’s youngest ever goalscorer after netting on his second appearance in an EFL Cup quarter final fixture against Leeds United aged just 17 years and 45 days old.