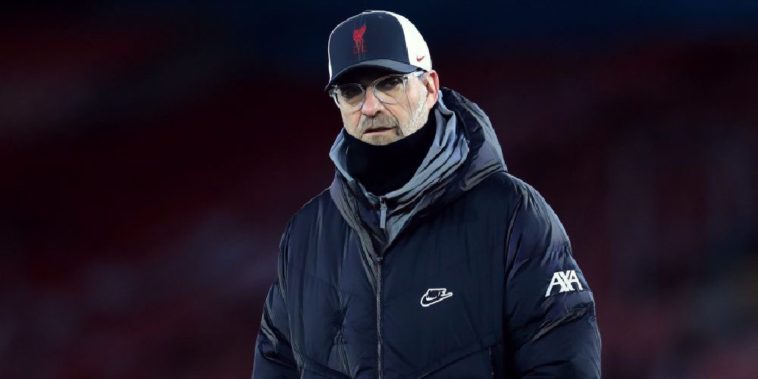 Liverpool came into the game in a disappointing run of form, without a win in their last three league games, and only having scored once in those outings, a run which has seen them surrender the lead at the top of the table to a United side who were unbeaten in their last 12 Premier League fixtures.

It was, however, Jurgen Klopp’s side who settled into the game the quicker of the two, with the league leaders looking content to sit back and weather the storm.

While Liverpool had the ball in the Manchester United half for large spells of the game, their fabled front three of Salah, Firmino and Mane looked far from their sharp best, with David de Gea rarely tested throughout the 90 minutes.

Despite not being at their best, it was Ole Gunnar Solskjaer’s side who perhaps had the best opportunities to steal all three points, though Bruno Fernandes and Paul Pogba both saw close-range efforts well saved by Alisson.

Speaking afterwards, Reds boss Jurgen Klopp admitted he was pleased with the overall performance level of his side,

1.6% – Since scoring with seven of their 14 shots against Crystal Palace (50%), Liverpool have scored just one goal from 62 shots in their last four Premier League games, a conversion rate of 1.6%. Problems. #LIVMNU pic.twitter.com/zStsoHF4zn

“If we won 1-0 I’d think it was completely fine,” he told Sky Sports. “You can’t deny Manchester United chances for 90 minutes. You never could. They’re in a good moment.

“With all the things said before the game – they’re flying and we’re struggling – my boys did a good game tonight.

“First half the counter-press was great, passing was good. But we didn’t score. That’s the most important thing in football.

“The second half was a bit more open. They had two big chances – Alisson made two good saves.”

The result means Liverpool are now goalless in their last three league outings – something that hasn’t happened since March 2005 – though the German seemed to be relaxed about his side’s struggles in front of goal, with only three of their 17 attempts being on target.

“There is no easy explanation. You always miss chances. You have to keep going and try to ignore the talk around it. Everyone wants to see goals. You cannot force it.

3 – Liverpool have failed to score in three straight @premierleague games for the first time since March 2005, whilst they are only the third different reigning PL champion to do so after Arsenal in 1998-99 & Leicester in 2016-17. Defused. #LIVMNU pic.twitter.com/xgtAZAcCrz

“It’s football. These moments happen. You have moments where you can’t explain why you score from all angles. Against Crystal Palace everything ended up in the net. It’s a bit annoying in between these moments.

“I like the game. I saw a lot of really good individual perfomances and the team performance was good. Not the result we wanted, but the result we got.”

Next up for Liverpool is a midweek home game against Burnley, before the two sides renew rivalries as the Red Devils host Liverpool at Old Trafford in the FA Cup fourth round next weekend.

QUIZ: Liverpool v Man Utd – How much do you know about this great rivalry?