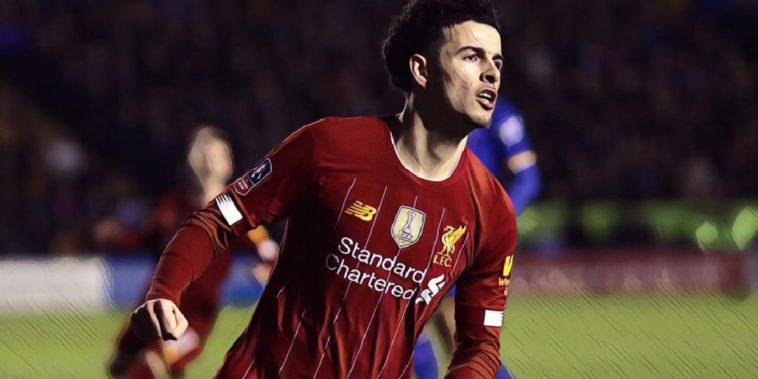 John Aldridge believes Liverpool prospect Curtis Jones ‘can be a star’ and has backed the young midfielder to replace Adam Lallana.

Jones became the youngest captain in the club’s history when handed the armband during Liverpool‘s 1-0 FA Cup fourth round replay victory over Shrewsbury on Tuesday night, starring as a side made entirely of youth players secured the Reds passage to a fifth round meeting at Chelsea.

The 19-year-old has impressed in his fleeting cup appearances this season and scored a stunning Merseyside derby winner against Everton earlier in the competition, before again finding the net in the drawn fixture with Shrewsbury prior to last night’s replay.

Aldridge was left hugely impressed by the performance of the creative midfielder at Anfield, and believes Jones has the potential to follow in the footsteps of Trent Alexander-Arnold as the club’s latest local-born academy graduate.

The former Ireland international also believes Jones could save the club a huge fee by replacing Adam Lallana in Klopp’s first-team plans, the 31-year-old having been tipped to leave the club in search of more regular first-team football at the end of the season.

“I’ve been watching Curtis for some years now since he was 15. And you could see – very much like Trent Alexander-Arnold – the potential that the lad had,” Aldridge told Sky Sports.

“He is just a quality footballer with natural ability and a good arrogance. He knows he is good and he does things the right way.

“But the lad can be a star. I’ve always known that and now that he has been given a couple of opportunities by Jurgen [Klopp] things have come to fruition.

“It looks like Adam Lallana is leaving at the end of the season after his contract expires. This lad will save the manager a lot of money because he can step right into the squad and you can always depend on him.

“He’s got a fantastic future.”