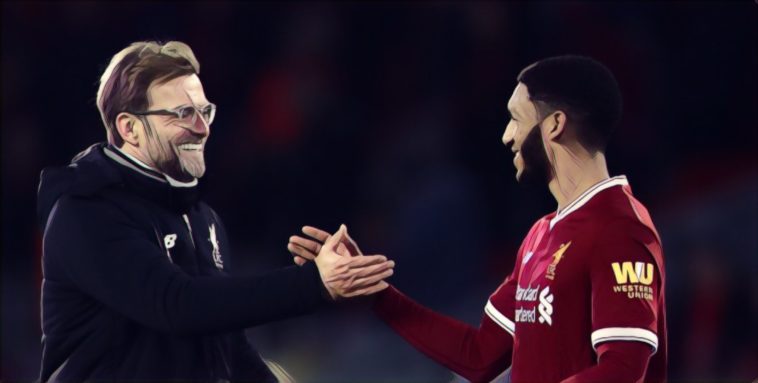 Liverpool boss Jurgen Klopp has lavished praise on Joe Gomez after the defender signed a new deal committing his long-term future to the club.

The 21-year-old today signed a new contract at Anfield which extends his stay at the club until 2024, and Klopp was keen to praise the former Charlton centre-back following the deal.

“It’s really nice news that makes a lot of sense to everyone involved,” Klopp told Liverpoolfc.com.

“Joe’s development and progression has been outstanding in the past couple of seasons and I only see his trajectory heading in an upward direction.

“He is so keen to learn and so keen to improve that I think his potential has no limit. Already this season we have seen him mature on the pitch and the credit for that goes 100 per cent to Joe himself for the attitude he has.

"I love the club, I love playing and learning here, and I am happy for that to continue." 🙌

“His versatility is something that makes him even more valuable. He can play centre-half in almost any system you can think of, plus both full-back positions. It is no exaggeration to say he is one of England’s best defenders already, but when you keep in mind he is still very young the room for further improvement and development is just so exciting.

“Off the pitch, I think I recently described him as ‘the nicest boy on the planet’ – and I mean it. He is so humble, so grounded, that it is a pleasure for me, my staff and the other players to work with him every day at Melwood.

“I think Liverpool is the perfect home for him now. We benefit from each other – player and club. We are the perfect environment for him to achieve his full potential and he makes our team and squad stronger. I love how much he looks to learn from every person in our dressing room. He soaks up the experience, while at the same time finding his own path.

“I’m really looking forward to seeing him take his career to the next level. Of course at the moment he has this injury, but he has already made a big contribution to this season and I have zero doubt when he returns he’ll not skip a beat from the high level he was at.”