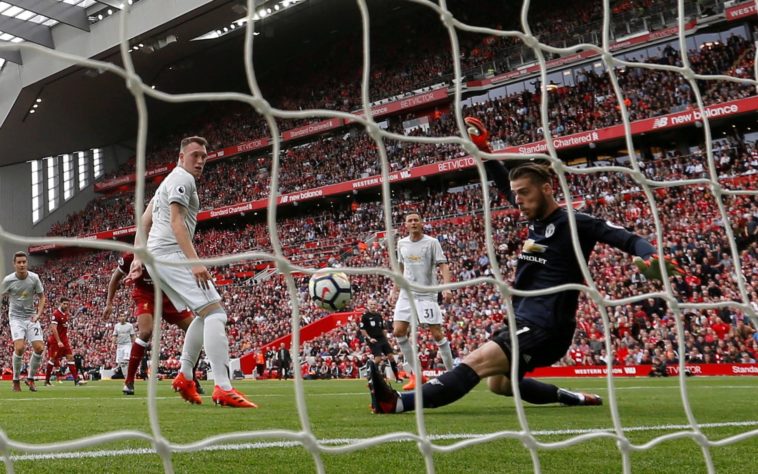 Two giants of English football clashed as Liverpool and Manchester United met for one of the world’s biggest fixtures. Here are five things we learned.

José Mourinho is renowned for creating teams that are difficult to beat. His teams are strong and resilient and are capable of nullifying any team. However, his insistence of defensive football against the big teams is incredibly dull to watch.

Once again Mourinho turned up at Anfield looking for a 0-0 draw and he got exactly that. In the past that would be a pleasing result for him considering they parked the bus and nullified the opponent.

This time it was different though. United will likely get praise for keeping a clean sheet and grinding out a credible draw away at one of the top teams. However it was far from comfortable and they certainly didn’t keep Liverpool quiet. It was only because of Liverpool’s profligacy that they got this result.

Liverpool’s poor defence is frequently criticised and rightly so but their wastefulness is often overlooked. Time and time again so far this season Liverpool have been the better side but haven’t come away with three points.

Sadio Mané’s absence may play a small part in that but other players have been lacking as well. Roberto Firmino has been presented with chance after chance this season but has only netted three times in 10 appearances.

The match against Manchester United was another prime example. Firmino did ok in linking up play and creating chances but never really looked like scoring himself. The same can be said for Daniel Sturridge who played up front for the latter part of the game.

Klopp quickly needs to find a way of ensuring that their liveliness in front of goal is matched by goal scoring chances.

All match Lukaku looked isolated and detached from the game, only occasionally looking interested. After lengthy periods of the game he appeared frustrated and needlessly gave away cheap fouls which didn’t help his team’s cause.

On the other hand he did have a shot on target which is something that can’t be said about five of his previous seven games against Liverpool. That must surely be a concerning statistic for Manchester United as they are yet to play many of the big teams.

United will be hoping his poor record against the top teams when playing for Everton will fade away with better quality players around him.

There’s not been much to shout about in terms of Liverpool’s defence recently but they might be able to in the future.

The match against United resulted in a rare clean sheet for Liverpool. It might not have been the most challenging match for the defenders but Joe Gomez put in a fantastic shift at right back. The 20-year-old England U21 captain look assured on the ball and his performance defied his years.

For much of the match he was lined up against Martial who struggled all game against Gomez. Not surprisingly the Frenchman was substituted for Rashford who fared no better.

When Nathaniel Clyne returns from injury he may find his place in the starting XI under jeopardy after Gomez and Alexander-Arnold both looked strong in his absence.

Manchester United have endured a difficult few years with their defence looking much less resilient than the one of old. Under Ferguson, Ferdinand and Vidic were vital to the side and helped win United many titles.

The defence of Smalling/Jones/Bailly/Lindelof looks a shadow of the United defence of old in comparison. Thankfully for United though, through all the change, they found a truly world class goalkeeper.

David de Gea has saved United countless times and he did so once again against Liverpool. Joel Matip had the biggest chance of the game to win it for Liverpool but de Gea produced an outstanding save to deny him.

David de Gea just keeps on reaffirming that he is one of the best and with every incredible save he edges closer to beating Buffon and Neuer as the best ‘keeper in the world.

There is no actual insight into how the game panned out. The blog just covered what was plain and obvious