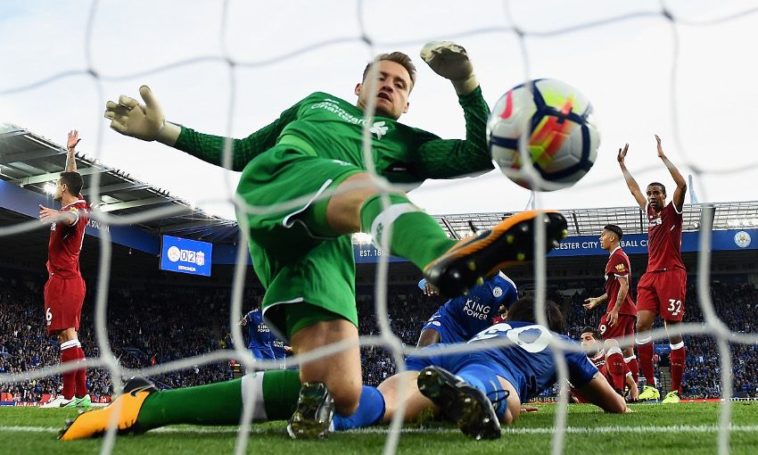 A replay of Tuesday night’s league cup fixture ended with Liverpool winning on this occasion despite defensive frailties. Here’s our match report.

There was just one change for Leicester from their 1-1 draw with Huddersfield last week. Shinji Okazaki came in for Kelechi Iheanacho. Okazaki impressed against Liverpool in the League Cup on Tuesday and earned a recall to the team.

The game began very end-to-end with both team struggling to keep the ball. Eventually the first chance of the game fell to Liverpool 13 minutes in. Can’s shot from 25 yards bounced back off the upright and fell straight to Salah. The Egyptian had the entire goal to aim at and somehow put it wide.

Just two minutes later Salah made up for his earlier miss. Coutinho swung in a brilliant cross to the far post from the left which Salah nodded past Schmeichel from a tight angle. It was a fantastic header but there are doubts over the goalkeeping.

Not much later Liverpool doubled their lead after Henderson was brought down by Ndidi. Coutinho stepped up to take the free-kick and rifled it in to the top corner from 25-yards, a brilliant free-kick from the Brazilian.

Liverpool’s calamitous defending re-emerged with seconds to go in what had been an excellent first half. Mignolet came out to punch clear a Leicester corner but it was a dreadful attempt at a punch. The ball hit Gomez and bounced towards the goal which Okazaki then tapped in to the net.

The first chance of the second half came on 67 minutes. Matip broke up a Leicester attack and set up a Liverpool counter. Sturridge, who had just come on, sprinted down the right and crossed the ball to an unmarked Henderson. The skipper cut inside and put the ball past Schmeichel to make it 3-1 Liverpool.

Just one minute later Liverpool were pegged back. Gray, who had come on for Mahrez, hit a well struck effort which Mignolet had to parry. The ball fell nicely to Vardy who headed in to an open goal. That was probably Vardy’s easiest of the six goals he has put past Liverpool in just four games.

It was an action packed few minutes as two minutes after Leicester had scored they were given another chance to. Vardy got in behind Matip and found himself in a race with Mignolet to get to the ball first. Mignolet got there first but got very little of the ball, he took more of a swipe at Vardy than the ball.

Mignolet’s error resulted in a Leicester penalty. Vardy had the chance to level the game for Leicester but a poor penalty from him meant an easy save for Mignolet who had clearly done his homework. However, Mignolet may have been lucky to be on the field after his challenge only received a yellow.

That penalty turned out to be the last big chance of the game. Liverpool ran out 3-2 winners but their defending left much to be desired.

Some will argue that it should never have been a penalty given that Mignolet got something on the ball first. However, contact with the ball was very minimal and Mignolet was probably lucky to get anything on it.

Mignolet clattered in to Vardy and it was a correct decision to award the penalty. Despite that some Leicester fans may feel aggrieved that Mignolet was not sent off. New ruling in the Premier League though dictates that teams do not face a ‘double whammy’. If a goalkeeper brings down a player and a penalty is awarded the maximum punishment is now a yellow card.

That ruling will leave a bitter note for Leicester fans though especially after Mignolet went on to save the penalty. To make matters worse they were denied claims for another penalty just seconds after. Gray attempted to cross in from the right but Can blocked it with his arm.

Can had his arms by his side but his attempt to duck to head the ball away meant that his arm struck the ball in the box. The decision appears unfair not to award a penalty. However, the handball either has to be deliberate or the arm in an unnatural position. Neither was true and as such the penalty could not be awarded.

Man of the Match: Jordan Henderson