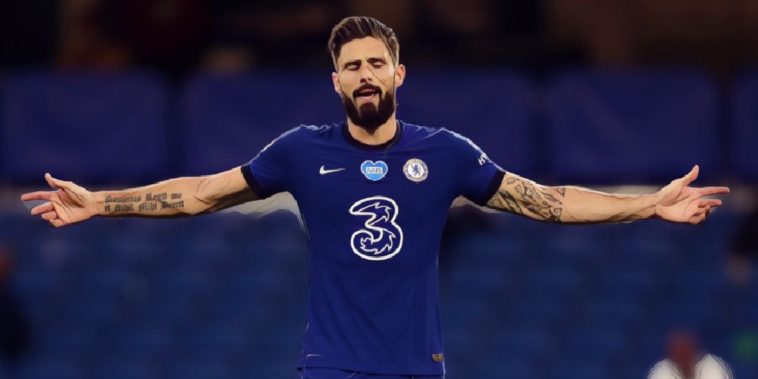 Chelsea got their pursuit of Champions League football back on track with a 1-0 win over an already relegated Norwich side at Stamford Bridge.

In fairness, it wasn’t a game of great quality or excitement, and despite Chelsea‘s domination, they struggled to break down Daniel Farke’s side.

However, the deadlock was broken deep into first-half stoppage time, Christian Pulisic putting in an inch-perfect cross from the left, with Olivier Giroud diving to head past Tim Krul from inside the six yard box, the 33-year-old netting his sixth goal in his last eight Premier League starts.

The Blues continued to dominate in the second half, though with little cutting edge, with only six of their 22 attempts being on target, and while Norwich kept it tight at the back, they offered next to nothing as an attacking force as they succumbed to their eighth straight defeat.

Speaking afterwards, Lampard admitted he wants to see ‘more’ from his side’s performances in the future, but admitted the result was the most ‘critical’ thing at this decisive stage of the season.

“It was ok. At this stage of the season results are critical and we didn’t concede any chances of note to let them score,” he told Sky Sports. “We were professional. I want more but that can wait. Where we are at as a team and where we are in the table it is all about the result.

“We need to move the ball quicker and be more mobile with our rotations. We have done it in parts this season but if we want to move on it needs to be better. But I don’t want to be too critical after a win.

“We didn’t give them anything to worry us. We had 10-15 minutes in the second half where we were slow and I didn’t like it but after that, we got it back. There was a bit more personality in our game but we can improve.”

Olivier Giroud looked like he was heading for the Stamford Bridge exit door back in January, but his glut of goals have seen him establish himself as the first choice striker at Stamford Bridge for the time being.

“He is always going to give you a desire to get in there for the team,” Lampard said of the Frenchman. “He had a few half chances in the central area. That is what you have to do when he is in the team – use his attributes. He has scored important goals. He has never given me a problem, always trained well. His professionalism is always good.”

The result sees Chelsea maintain their third-placed position going into the final two games of the campaign, where they will face much more challenging opposition in the shape of Liverpool and Wolves. Leicester and Man Utd are hot on their heels, with both sides still to play each other in the final game of the season, though Lampard unsurprisingly refused to be drawn on which two sides would make it into next seasons Champions League.

“It is tough one to call. This is the Premier League and it is not easy. Rather than give you a pointless answer we take our three points, worry about ourselves, watch the others teams and think about the FA Cup.”

Next up for Chelsea is an FA Cup semi-final against Manchester United at Wembley on Sunday.

Oblak named as Chelsea’s ‘number one target’ to replace Kepa