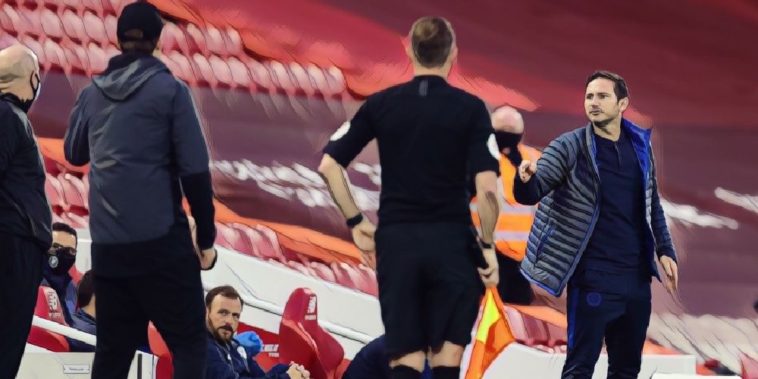 Frank Lampard has spoken of his ‘regret’ following his touchline spat with Liverpool’s coaching staff, the Chelsea manager clashing with the Reds’ bench during his sides 5-3 defeat at Anfield in midweek and calling them ‘arrogant’

Chelsea‘s hopes of securing a top four finish and Champions League qualification were dealt a blow following defeat to the newly-crowned champions on Merseyside, with the behaviour of Jurgen Klopp’s backroom team irking the Blues’ boss who let his feelings known in his post-match interview.

“There were a lot of things that were ongoing and on the bench,” Lampard said. “I’ve got no problem with Jurgen Klopp, he’s managed this team and it’s fantastic. Some of the bench, it’s a fine line between when you are winning – and they’ve won the league, fair play to Liverpool Football Club – but also don’t get too arrogant with it.”

Lampard’s expletive-filled rant towards the Liverpool bench during the clash was picked up by the pitchside microphones and has since been widely circled on social media, and the Chelsea boss admits he regrets the language used as emotions ran high.

“To be honest, I have seen the video and I was there. In terms of the language I used, I do regret that,” Lampard admitted in his pre-match press conference.

Frank Lampard was involved in a heated row with the Liverpool bench on Wednesday – and then saw Trent Alexander-Arnold smash one in to the top corner 🚀 pic.twitter.com/HWztPiTUvv

“These things get played a lot on social media. I have two young daughters on social media, but in terms of my passion to defend my team, then no [regrets].

“I could have handled it differently but some of the reports were I was upset with the celebrations. Far from it. They can celebrate like every goal.

“I would have had a beer with Jurgen Klopp to toast their success.

“There were things I didn’t like from their bench, not Jurgen Klopp, but their bench. Emotions run high in this game.”

Chelsea host Wolves on Sunday in their final game of the season, a point being enough to see them qualify for the Champions League.