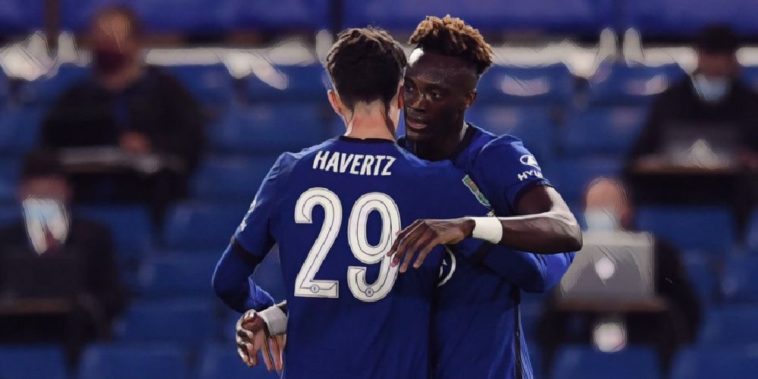 Frank Lampard reflected on ‘a very good night’ as new man Kai Havertz’s hat-trick helped Chelsea to a 6-0 drubbing of Championship side Barnsley on Wednesday evening.

The Carabao Cup fixture saw Lampard hand a debut to Thiago Silva and Ben Chilwell, yet it was the young German starlet Havertz who stole the show as the Blues breezed into the next round.

Lampard made eight changes to the side that lost to Liverpool on Sunday, although that did little to lessen the quality on show as the home side ran riot at Stamford Bridge.

The hosts were quickly ahead following a composed Tammy Abraham finish, before the striker then produced a real moment of quality as his dummy set up Havertz for his first goal in a Chelsea shirt. The second half began in similar fashion as Ross Barkley made it 3-0, before Abraham was once again on hand to lay on two sumptuous assists for his German teammate to put the game well out of reach for the South Yorkshire side.

Olivier Giroud added the gloss with a late goal, yet it was Havertz who was the star of the show and looked at home in his preferred number 10 role, much to the delight of his manager.

“I am delighted with Kai with everything I wanted the night to be with him,” Lampard told his post match press conference. “I said it in the last two games that Kai has had no pre-season and in signing for the club, I think it took a few days out as well. We had to play him because we have had a few injuries and tonight was as great exercise and another game for him to see how we work off the ball, to be part of that.

“He makes the recovery tackle for Ross’s goal, but then to also just have some freedom on the ball in central areas roaming behind Tammy. The combinations he had with Tammy, the way he grew into the game and had confidence and the three goals. It was a great night for Kai and the first of many for him.”

While the quality of his side’s attack would no doubt have thrilled the Chelsea boss, it was the work rate off the ball that Lampard was looking out for, the game something of a ‘training exercise’ to get his side back up to full fitness.

“It was a very good night in those terms because my concerns were before the game that I wanted it to be a training exercise. I wasn’t disrespecting the game because I knew it would be a tough game. Barnsley are very good and we want to do well in this competition. But the phase we are in now I wanted to see how good we could be off the ball, last year we were fantastic in large parts of the season in winning the ball back and having high pressure.

“We haven’t found that just yet because of fitness and with the new shape of the team. Today we started to see elements of that back in our game.

“Then I had a big concern about how we were on the ball because we haven’t been so smooth as we can be in the first two games for different reasons. We saw elements of that in the game. And then all the individuals and the minutes and the fitness and the combinations of the team started to show tonight. So it became a very positive night in the end.”