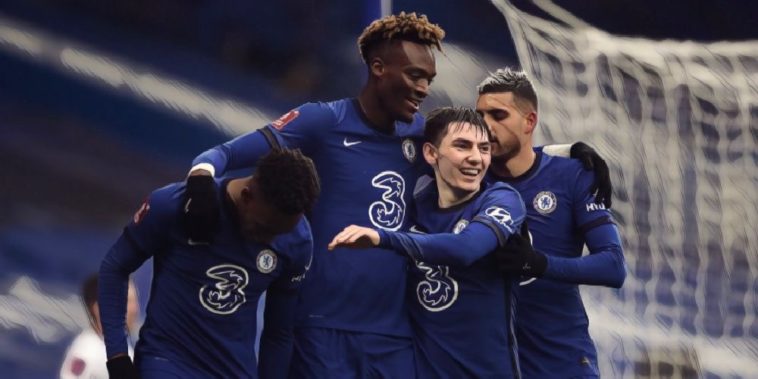 A Tammy Abraham hat-trick helped Chelsea get back to winning ways with a 3-1 win over Championship side Luton Town to book their place in the FA Cup fifth round.

Frank Lampard’s side have been in woeful form in recent weeks, winning just three times in their last 10 games in all competitions to leave the Blues boss facing questions about his position at the club.

Chelsea did, however, take the lead against their second-tier opponents after just 11 minutes, a quick throw-in releasing Timo Werner down the right channel, the German getting behind the visitors’ defence and pulling the ball back to Tammy Abraham who side-footed home his ninth goal of the season. The goal was however laced with controversy, with two balls on the pitch at the time the initial throw-in was taken, much to the dismay of Hatters’ players.

Five minutes later and the Blues doubled their advantage, a delicious ball from Reece James finding Abraham in the box, the England international rising highest and heading past Simon Sluga who was left in no-mans-land having started to come to collect the cross before changing his mind.

Luton changed shape to a back four, and quickly got their reward, full-back James Bree getting a cross in from the right which was met on the half-volley by Jordan Clark. The midfielder kept his effort low, though in truth, error-prone ‘keeper Kepa Arrizabalaga certainly didn’t cover himself in glory with his attempted save, the ball squirming past the Spaniard who got a hand to the strike.

Abraham had already squandered three chances to take home the match ball, but he finally completed his treble from close range in the 74th minute. Callum Hudson-Odoi was only introduced from the bench four minutes earlier, and he instantly proved to be a dangerous threat down the left, and having played a one-two, the 20-year-old served up a chance that Abraham simply couldn’t miss from inside the six-yard box.

Timo Werner had the opportunity to bag himself a confidence-boosting goal, the summer signing racing into the box before being brought down by goalscorer, Clark, though the out-of-form forward saw his poor effort from the resulting spot kick saved by Stuga.

Timo Werner has scored just one goal in his last 16 games for Chelsea.

Speaking afterwards, Frank Lampard was happy to see his side progress to the last 16, praising hat-trick hero Abraham and substitute Hudson-Odoi for their performances.

“It’s important to go through [to the fifth round], clearly it’s a competition that we’ve had success in the modern era,” he said at his post-match press conference. “The expectation is that we go through.

”In practice, it’s not a simple as it sounds. Luton are a good side. We had to get our game right and we did, we got it right in every sense, other for the two sloppy moments – one for their goal and one to give them a chance.

”Everything was pretty much nailed on, and Tammy got his three goals which is great for him, great for us to keep his confidence up, but the overall performance was really good.

“[His third] was a team goal. Callum [Hudson-Odoi] did very well with his input in it and it’s lovely to see goals like that. There was a lot of good play from us today, a lot of threats. I’m pleased because that’s positive. Players need to continue with that attitude.”

Lampard also had plenty of praise for his homegrown midfield pair of Billy Gilmour and Mason Mount.

“I thought the two in midfield were great. Their movement of the ball, their discipline, it’s something we can look at going forward.

“[Gilmour] was outstanding today. He’s comfortable on the ball, his discipline, he was outstanding. With his youth and the injury he had, and with the run we’ve been on, it’s about finding the right time to bring him in. For the short term, he won’t be going out on loan but we’ll keep that open a little until the end of the month.”

Chelsea next play Wolves in the Premier League on Wednesday night, while their win sets them up with a tie against Championship side Barnsley in the FA Cup fifth round.

See also – Klopp Killers: The only five away managers to win at Anfield in the Jurgen Klopp era