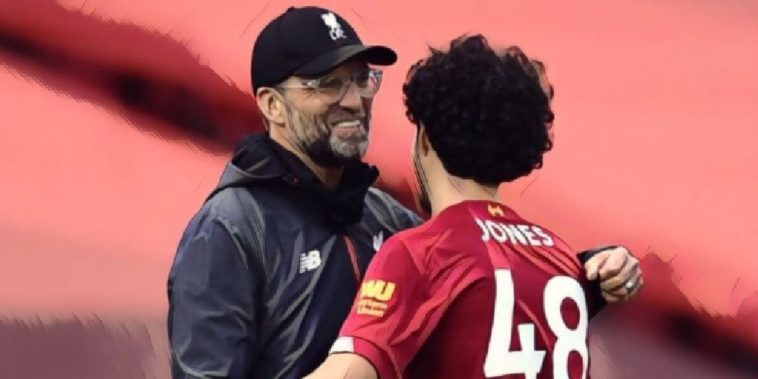 Jurgen Klopp has talked up the ‘big talent’ of Curtis Jones following the Liverpool midfielder’s first call-up to the England U21 squad.

The academy graduate has made huge strides with the Reds of late and has forced his way into Klopp’s first-team plans, making three appearances for the senior side so far this season and scoring twice in the Carabao Cup victory over Lincoln last week.

Klopp has been pleased with the development of the teenager and says he is firmly in his thinking ahead of the campaign, insisting the attacking midfielder is already a player capable of performing for the Premier League champions when called upon.

“On a personal level, on a football level – it’s really nice being around when a big, big, big talent, young talent, grows up pretty much and matures over the time. It’s really nice to be around and that’s what I enjoy a lot,” Klopp said at his pre-match press conference ahead of Sunday’s clash with Aston Villa.

“Curtis, I have to say is just a proper, proper part of this squad, which is really already an achievement, if you want. Nothing you want to tell your grandkids [about], because if it’s the best thing you ever did in your life it’s not so nice. But for the age group he is in, it’s massive.

“Nobody would have a bad sleep the night before the game if I tell them Curtis will start tomorrow, in whichever Premier League game. So that’s good news.

Jones’ performances have also seen the 19-year-old included in the England U21 squad for the first time, earning his first inclusion alongside Tottenham defender Japhet Tanganga.

The Young Lions travel to face Andorra before hosting Turkey as they bid to secure qualification for next summer’s European Championships, and Klopp was delighted to see the starlet handed his opportunity at international level.

“From that perspective, I have to say for me it’s completely logical that he is in the U21 squad for England because he is just ahead of his age group, I would say. And so U21 is exactly the team he should play for [at] England in the moment.”