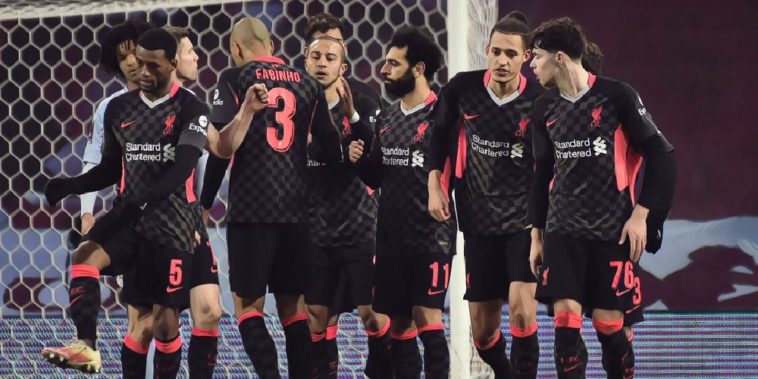 Liverpool booked their place in the FA Cup fourth round with a dominant 4-1 win over Aston Villa’s U23 side.

It had shaped up to be an intriguing game at Villa Park, with Aston Villa having been in good form during the opening months of the campaign – including a 7-2 win the last time the two sides met – while Liverpool have been off-colour in recent weeks, and came into the tie without a win in their last three.

However, all that was blown out of the water with the news of a ‘significant’ outbreak of Coronavirus in the Villa ranks, with the club confirming today that 10 of their first-team squad had tested positive for Covid-19.

Villa were forced to field a team comprised of U23 players, and with Liverpool’s side littered with international quality, it didn’t take long for them to exert their superiority, Sadio Mane heading home a Curtis Jones cross unopposed from eight yards in just the fourth minute past 19-year-old ‘keeper, Akos Onodi.

It looked as though the early goal would open the floodgates for Jurgen Klopp’s side, who enjoyed a whopping 83% possession, though Villa’s youngsters defended well, while Onodi made some decent saves to keep the score at one.

An impressive debut despite the circumstances. 👏 pic.twitter.com/N49Ki9lEoD

Then, somewhat incredibly, the young Villains hauled themselves level in impressive fashion. Callum Rowe played a superb through-ball to former Barcelona teenager Louie Barry, who showed superb pace and strength to get in behind the Liverpool defence, before slotting past Irish ‘keeper Kelleher.

The Premier League champions were once again camped in Aston Villa territory after the interval, and their incessant pressure eventually told as they stormed into the fourth round with three quickfire goals.

Gini Wijnaldum stroked home from the edge of the box just on the hour mark, before Mane bagged his second with a looping header three minutes later. Mohamed Salah rounded off the scoring to make it four in the 65th minute, and speaking afterwards Jurgen Klopp admitted his side were ‘rusty’, with his side having failed to score in their previous two outings.

“The kids did really well – that’s good,” he told BT Sport. “We had football problems. We needed a little bit longer but then it was completely clear.

“Problems in passing and moving. Too many on the wrong side of the ball – not enough recoveries of passes. We had chances and shot the ball directly at the goalie – we changed it in the second half.

29 – Liverpool had 29 shots against Aston Villa, their most in an away game since attempting 30 away at Bolton Wanderers in a Premier League match in August 2009. Peppered. pic.twitter.com/yJ0rQUEsXP

“It was rusty but better in the second half. Against Southampton, from the first second, they were more on the pitch but that was not the case today.”

Next up for Liverpool is a top of the table clash against bitter rivals, Manchester United – the two sides currently level on points although the Red Devils play their long-held game in hand against Burnley in midweek offering them a chance to go into the game top of the league.

Breaking the top six: What each of the contenders need in January