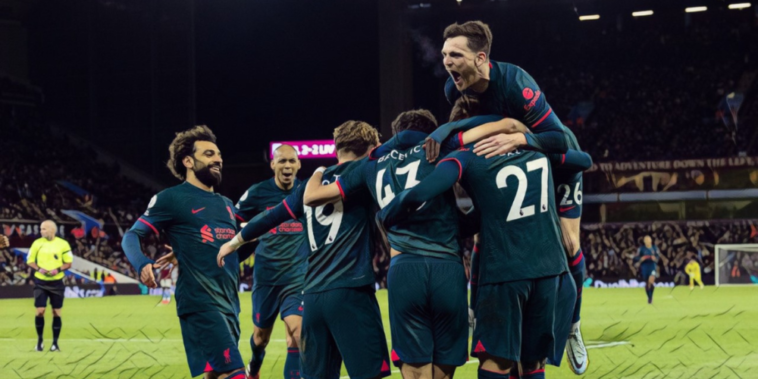 Jurgen Klopp was pleased with a ‘top performance’ from Liverpool after his side won 3-1 at Aston Villa.

Liverpool closed the gap to the top four with an impressive first-half performance at Villa Park. Mohamed Salah opened the scoring inside five minutes after tapping in from Andy Robertson’s cross, a move that saw the Liverpool full-back overtake Leighton Baines as the defender with the most assists in Premier League history.

Both sides wasted chances in an open game, with Darwin Nunez guilty of squandering several opportunities to double the visitor’s lead. Virgil van Dijk did make it 2-0 before half-time, as the centre-back fired in from an acute angle after Villa failed to clear a set-piece.

Villa improved after the break and pulled a goal back through Ollie Watkins’ header, but Liverpool restored their two-goal cushion as teenager Stefan Bajcetic came off the bench to score his first goal for the club.

Klopp was delighted with the win as Liverpool won three consecutive Premier League games for the first time this season.

“It was a top performance in a difficult game. I think we played exceptionally in the first half,” Klopp told Amazon Prime.

“Villa had their moments but we were really good. I liked what I saw. We told the boys at half-time where we could do better and the only problem was in the second half we missed the last step all of a sudden.

“Villa were pushing hard, in a home game that’s normal, we knew that would happen, and you have to get through those periods. We could have scored the third goal much earlier but it’s fine, and I loved the situation around the third goal.”