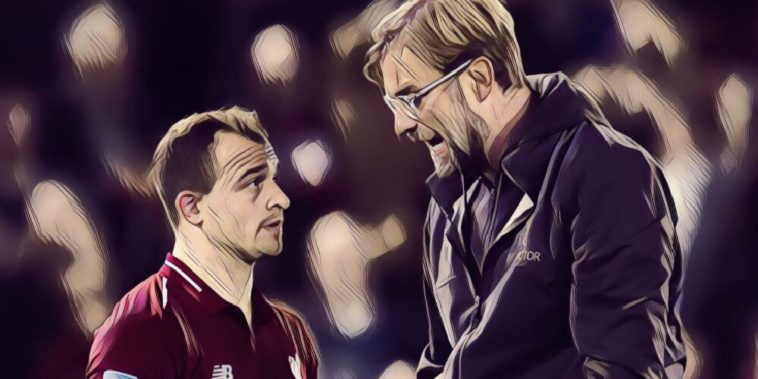 Liverpool boss Jurgen Klopp has opened up about his heated post-match discussion with Xherdan Shaqiri after his sides 2-1 loss to Chelsea last night in the Carabao Cup at Anfield.

Klopp ran onto the pitch and seemed to admonish £13.5 million summer signing Shaqiri after the final whistle, with many speculating that it was because the Swiss attacker has missed a glorious chance with his side 1-0 up.

However, the Reds manager has insisted that the discussion looked worse than it was and he was simply letting his player know that he should have laid off a late free-kick to teammate Mohamed Salah.

“Oh no. No, I spoke about a free-kick, the last on,” Klopp told reporters after Wednesday night’s defeat.

“We wanted to have Mo a bit wider, so pass the ball to Mo. The whole bunch of players was in one direction where we shot the ball then actually, and if he can send Mo in a one-on-one situation in the last situation of the game it would have been not too bad.

“But the boys, maybe it was too loud in the stadium they didn’t hear me anymore. It doesn’t make too much sense. What I said there was only about the free-kick nothing else.”

Liverpool will face Chelsea again this weekend at Stamford Bridge in the Premier League.