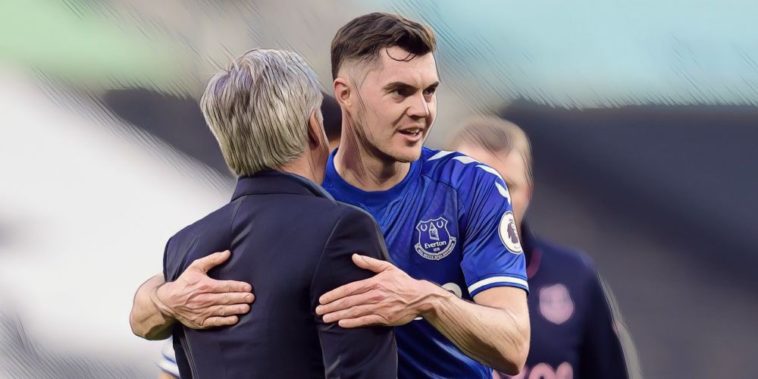 Michael Keane has urged Everton to push for the ‘top four’ and has outlined his excitement at working alongside Carlo Ancelotti at Goodison Park.

Everton made an impressive start to Ancelotti’s first full season on Merseyside, before suffering a run of results which saw them win just one game in seven league outings. They have recently returned to form with impressive victories over Chelsea and Leicester over the past week, leaving them just one point adrift of the Champions League places.

Ancelotti’s arrival at the club was viewed as a significant coup for the club, and Keane has spoken of his delight at learning from the three-time Champions League winner, admitting he is following in the footsteps of some of his idols in being coached by the Italian.

“He was naming Maldini, Cannavaro – loads of unbelievable players,” Keane said in an interview with the Telegraph. “These are players I watched and idolised as a kid and he has managed them and now he’s managing me. It’s just brilliant.”

Keane believes that Everton are now in the perfect position to improve as they bid to return reach Europe and challenge for long-awaited silverware, insisting the Toffees are heading in the right direction under a manager with ‘one of the best records in history’.

“We have a manager with one of the best records in history so if we can’t learn from him then who can we learn from? I think it shows the direction the club wants to go in and they really mean it by getting someone like Carlo with his history and the players he has worked with.

“He also genuinely loves being here and sees where the players want to go, what we want to do, how hard we work day-in, day-out, the team spirit we have got. He knows he can keep improving us and get us challenging.”

The England international spoke further on the club’s ambitions and believes there is no reason that Everton cannot challenge for a position in the top four and Champions League qualification, hailing the current campaign as a ‘massive season’ for both himself and the club.

“It’s time we pushed on and took the club into the top four,” he says. “A lot of us are at an age where we are good enough to push for better than where we have been for the last few years. I am 27, it’s a time now when I want to win trophies and to play in Europe for Everton and that will help my chances with England as well. So it feels like a massive season for me.”